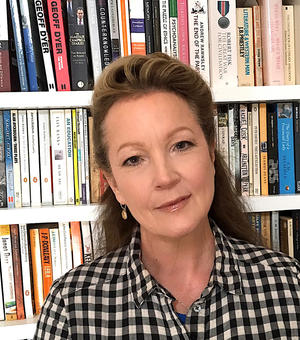 Charlie Lee-Potter teaches the early-eighteenth century novel, Victorian literature, contemporary fiction, and creative writing. Her research interests include the intersection of geometry and literature, as well as the representation of catastrophe in art, music and literary texts.

Her recent publication, Writing the 9/11 Decade: Reportage and the Evolution of the Novel (New York: Bloomsbury Academic), was shortlisted for the University English Book Prize. In it, she analyses the relationship between literary fiction and reportage and the role of both in shaping culture. Beginning with an examination of the sometimes mawkish writing that emerged in the days after 9/11, the book traces the evolution of literary journalism by writers such as Ian McEwan, Don DeLillo and Mohsin Hamid into new fictional methods of subsuming the attacks. In assessing the novel's capacity to contain an unimagined traumatic event, Writing the 9/11 Decade stands as a contemporary history of the form.

As a former BBC radio and television journalist, Charlie Lee-Potter has a longstanding interest in literature and the spoken word. She was a foreign correspondent and presenter of BBC Radio 4's flagship news programmes for many years, specialisms which inform her ongoing work as a professional artist working in the field of contemporary video, soundscape, photography and printmaking. She is currently writing an interdisciplinary book about geometric form and landsape, accompanied by a body of work which includes etchings, photographs and sculpture.