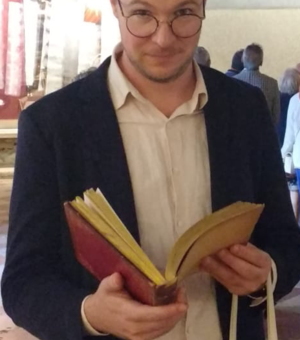 My first book, Tact, is about the development in nineteenth-century Britain of a new mode of feeling one’s way with others in complex modern conditions. The book traces how the essay genre came to exemplify this sensuous new ethic and aesthetic. It argues that the essay form provided the resources for the performance of tact and analyses its techniques in the writings of Charles Lamb, John Stuart Mill, Matthew Arnold, George Eliot, and Walter Pater. Offering fresh approaches to thinking about criticism, sociability, politics, and art, Tact concludes by following a legacy of essayistic tact to the practice of twentieth-century British psychoanalysts like D. W. Winnicott and Marion Milner. You can read an interview about the book here: https://fivebooks.com/best-books/victorian-essay-david-russell/

Now I am working on a project called “Facing Reality: Sage Writers on Human Flourishing,” which studies the intellectual context and literary techniques by which certain “sage” Victorian and twentieth-century writers sought to make their readers face new realities: political, psychological, ethical and environmental. It has led my interests to figures like John Ruskin, George Eliot, James Baldwin and Susan Sontag. This project has been supported by the Leverhulme Foundation.

My tutorial teaching covers the romantic period to the present, as well as theoretical approaches to literature. I lecture for the faculty across these fields. I have co-convened the MSt in English, 1830-1914, and taught a special option on Philosophy and Literature. I currently run, with the writer and psychoanalyst Adam Phillips, a seminar at Corpus on “Ordinary Language Psychoanalysis.”

“The Idea of Matthew Arnold” in Thinking Through Style: Non-Fiction Prose of the Long Nineteenth Century ed. Hurley and Waithe, (OUP, 2018)