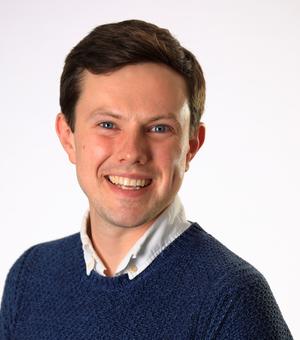 I work primarily on twentieth- and twenty-first-century British and American poetry, with a focus to date on two areas in particular: modern poetry's relationship with film and with intertextuality and literary history.

During my Fellowship, I am writing a monograph titled Charlie Chaplin Among the Poets, which examines the filmmaker’s far-reaching relations with poetry and poets over the past century. As cinema’s foremost global icon, Chaplin has inspired many poets in diverse and complex ways – from delight at his slapstick clowning to admiration of his political activism and regard for his sentimental storytelling – while he also knew major writers in his lifetime and styled himself as an avid reader of verse. Using archival research to uncover Chaplin’s biographical relationships with poets and drawing on both literary criticism and film studies to analyse their work’s mutual influence, my book seeks to open up new perspectives on a wide range of poetry – including Wilfred Owen, Marianne Moore, Louis Zukofsky, Elizabeth Bishop and Bob Kaufman – as well as on the life and work of film’s most famous comedian.

A second book project is titled John Milton and Modern Poetry. This monograph, which builds on my doctoral thesis, aims to expand and complicate our understanding of Milton’s influence on twentieth- and twenty-first-century poetry, moving beyond the Milton Controversy and the debates of T. S. Eliot and F. R. Leavis. The book situates Eliot's and Leavis's critiques amid a far more complex and dynamic portrait of Milton's modern reception history, exploring his afterlives in the poetry of Marianne Moore, the New Critics, Robert Lowell, Geoffrey Hill, Lucille Clifton and Monica Youn.

Other recent publications include an article on the geography of the Western Front in David Jones's In Parenthesis and a chapter on the 'pseudo-city' in early-twentieth-century British writing. In addition to the projects discussed above, I am also currently at work on an article examining the enormous impact Jean Cocteau’s Oprhée (1950) had on a generation of poets who came of age after the Second World War.

My teaching focuses primarily on twentieth- and twenty-first-century poetry, with particular interests in: modernism and its legacies; film and literature; the city; the long poem; influence and intertextuality.

In the English Faculty in 2021-22, I am co-convening the FHS Paper 6 'Writers and the Cinema' with Dr Rachel Bryan and convening an MSt C-Course '"The Care and Feeding of Long Poems": Writing At Length in Modern and Contemporary Poetry'. I have previously delivered the Prelims Paper 4 lecture series 'Five Approaches to Modern and Contemporary Poetry' and co-convened the Paper 6 'The Ode from the Eighteenth Century to the Present' with Dr Oliver Clarkson.

I am always interested in supervising BA and MSt dissertations in areas related to my research. In recent years, I have supervised dissertations on such topics as: Surface Reading Anne Carson and Maggie Nelson; The Parisian Flâneuse in Modern Literature and Film; The Politics of Ekphrasis in Seamus Heaney and Derek Mahon; Louis Zukofsky, Chaucer and Intertexuality.

- 'The Stoic Comedy of Elizabeth Bishop and Buster Keaton', ELH (accepted for publication).

I studied for my BA, MA and PhD degrees at University College London, for which I was awarded an AHRC Research Preparation Masters Studentship and a Wolfson Postgraduate Scholarship in the Humanities. After completing my doctorate, I taught at UCL, Queen Mary University of London and on the University of Virginia’s study abroad programmes, before beginning my Leverhulme Trust Early Career Fellowship in the Faculty of English at Oxford in September 2019.