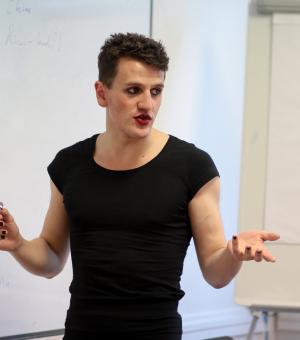 Thesis Title: Irish Modernism and the Politics of Sexual Health

Doctoral Research: Lloyd (Meadhbh) Houston is Hertford College – Faculty of English DPhil Scholar in Irish Literature in English at the University of Oxford. Their thesis examines the ways in which authors, politicians, and activists in late nineteenth and early twentieth-century Ireland harnessed debates over sexual hygiene, population control, and eugenics to construct and contest models of Irish identity.

By reading a selection of canonical and less well-known Irish modernist texts by authors such as George Moore, WB Yeats, JM Synge, Oliver StJohn Gogarty, James Joyce, and Samuel Beckett against a range of nationalist journals (Sinn Féin, The Leader, Bean na hÉireann), ecclesiastical periodicals (the Catholic Herald and Irish Rosary), and medical texts by figures such as Bénédict Morel and Henry Maudsley, their thesis presents a historicised account of the ways in which sexual health discourses were deployed to envisage often conflicting models of Irish identity. In doing so, it combines literary analysis and a sensitivity to the social history of medicine and science to illuminate the vexed relationship between constructions of gender, sexuality, and ethnicity in twentieth-century Irish culture and politics, and to highlight the centrality of sexual health discourse to the emergence and development of Irish modernism.

Research Interests: Lloyd (Meadhbh)'s research interests include Irish studies, the social history of medicine, queer modernisms, literature and the law, and the institutional construction of obscenity.

Their work has appeared in the Review of English Studies, The Library, and the Irish Studies Review, where they were awarded the 2017 British Association of Irish Studies Essay Prize, and has been featured in the Times, the Guardian¸ and on the Modernist Podcast.