Comets, omens and fear: understanding plague in the Middle Ages

This article was originally published on The Conversation. Read the original article. 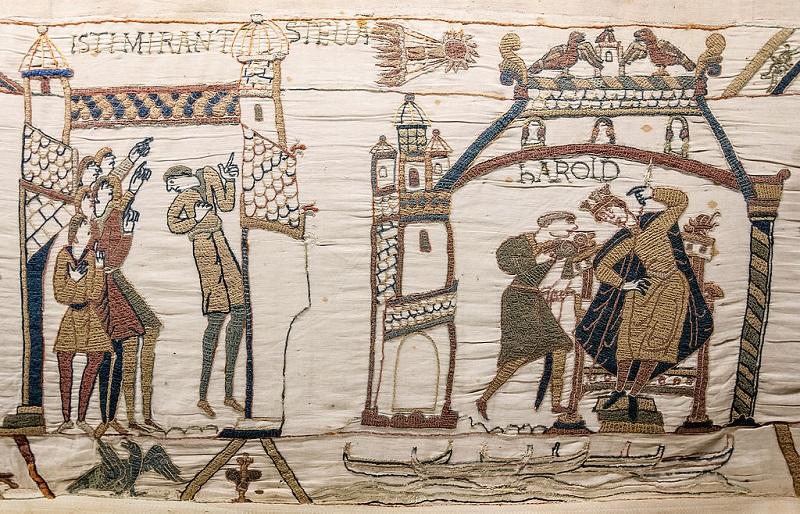 On August 30 2019, a comet from outside our solar system was observed by amateur astronomer Gennady Borisov at the MARGO observatory in Crimea. This was only the second time an interstellar comet had ever been recorded. Comet 19 or C/2019 Q4 , as it is now known, made its closest approach to the sun on December 8 2019, roughly coinciding with the first recorded human cases of COVID-19.

While we know that this is merely coincidence, in medieval times authorities regarded natural phenomena such as comets and eclipses as portents of natural disasters, including plagues.

One of the most learned men of the early Middle Ages was the Venerable Bede, an Anglo-Saxon monk who lived in Northumbria in the late seventh and early eighth centuries. In chapter 25 of his scientific treatise, De natura rerum (On the Nature of Things) , he describes comets as “stars with flames like hair. They are born suddenly, portending a change of royal power or plague or wars or winds or heat”.

Outbreaks of the bubonic plague were recorded long before the Black Death of the 14th century. In the 6th century, a plague spread from Egypt to Europe and lingered for the next 200 years. At the end of the seventh century, the Irish scholar Adomnán, Abbot of Iona wrote in book 42 of his Life of St Columba of “the great mortality which twice in our time has ravaged a large part of the world”. The effects of this plague were so severe in England that, according to Bede, the kingdom of Essex reverted to paganism.

The Anglo-Saxon Chronicle records that 664 “the sun grew dark, and in this year came to the island of Britain a great plague among men (‘micel man cwealm’ in Anglo Saxon)”. The year 664 held great significance for the English and Irish churches: a great meeting (or synod) was held in Whitby in Northumbria to decide whether the English church should follow the Irish or Roman system for calculating the date of Easter. By describing the occurrence of an eclipse and plague in the same year as the synod, Bede makes this important event in the English Church more memorable and meaningful.

In the Middle Ages, occurrences like plague and disease were thought of as expressions of God’s will. In the Bible, God uses natural phenomena to punish humankind for sin. In the Book of Revelation 6:8, for example, pestilence is described as one of the signs of Judgement Day. Medieval scholars were aware that some plagues and diseases were spread through the air, as explained by the seventh-century scholar Isidore of Seville in chapter 39 of his De natura rerum (On the Nature of Things):

Pestilence is a disease spreading widely and infecting by its contagion whatever it touches. When plague (‘plaga’) smites the earth because of mankind’s sins, then from some cause, that is, either the force of drought or of heat or an excess of rain, the air is corrupted.

Bede based his On the Nature of Things on this work by Isidore. In a discussion of plague in the Old English version of Bede’s Ecclesiastical History we find a reference to the “an-fleoga”, meaning something like “the one who flies” or “solitary flier”. This same idea of airborne disease is a feature of Anglo-Saxon medicine. One example comes from an Old English poem we call a metrical charm, which combines ancient Germanic folklore with Christian prayer and ritual. In the Nine Herbs Charm, the charmer addresses each herb individually and invokes its power over disease:

this is against the loathsome one that travels throughout the land …

if any poison come flying from the east,

or any come from the north,

or any from the west over the nations of men,

Christ stood over the disease of every kind.

As well as fearing plague, medieval scholars attempted to pinpoint its origins and carefully recorded its occurrence and effects. Like us, they used whatever means they could to protect themselves from disease. But it is clear medieval chroniclers presented historical events as part of a divine plan for humankind by linking them with natural phenomena like plagues and comets.

This article is republished from The Conversation under a Creative Commons license. Read the original article.