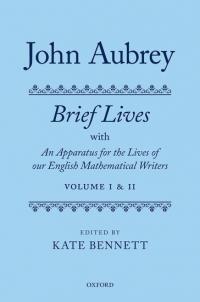 The British Academy's Rose Mary Crawshay prize in 2017 will be awarded to the English Faculty's Dr Kate Bennett for John Aubrey: Brief Lives with an Apparatus for the Lives of our English Mathematical Writers (Volume I & II).

In April 1888 Mrs Rose Mary Crawshay established ‘The Byron, Shelley, Keats In Memoriam Yearly Prize Fund’. In 1914, some years after her death, the Charity Commissioners transferred the administration of the prize fund to the Academy.  It is now awarded for a historical or critical work on any subject connected with English Literature by a woman of any nationality.

The Academy will also present a British Academy Medal to Professor Dame Marina Warner DBE CBE FBA for her life’s work as an author, historian and journalist.

At its 2017 Prizes and Medals ceremony, to be held this evening (Wednesday 27 September) in central London, the Academy will recognise a host of academics, broadcasters, writers and entrepreneurs for their distinction in – and dedication to – the subjects that make up the arts, humanities and social sciences. Professor Sir David Cannadine, President of the British Academy, will host the ceremony.