From Restorer to Editor: The Evolution of Lewis Theobald's Textual Critical Practice 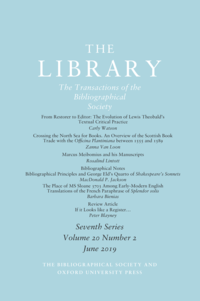 Lewis Theobald made his name as a Shakespearean textual critic in 1726 with Shakespeare Restored, but it was not until 1733 that his edition of Shakespeare’s plays was published. This article traces Theobald’s development as a Shakespearean scholar and editor during this period. Drawing on his surviving correspondence with William Warburton and on an extant portion of the printer’s copy for his edition, the article shows how Theobald continued his work on Shakespeare’s text after 1726 and how he used the materials he amassed to prepare his edition. This leads to a reassessment of Theobald’s treatment of his copy text, Alexander Pope’s edition of the plays. An analysis of Theobald’s editing of King Lear makes clear that, far from rejecting Pope’s conjectures and improvements, Theobald chose to appropriate many of them as part of his mission to produce a more intelligible text of Shakespeare.