'Happy in Berlin?' exhibition now open at the Bodleian Library 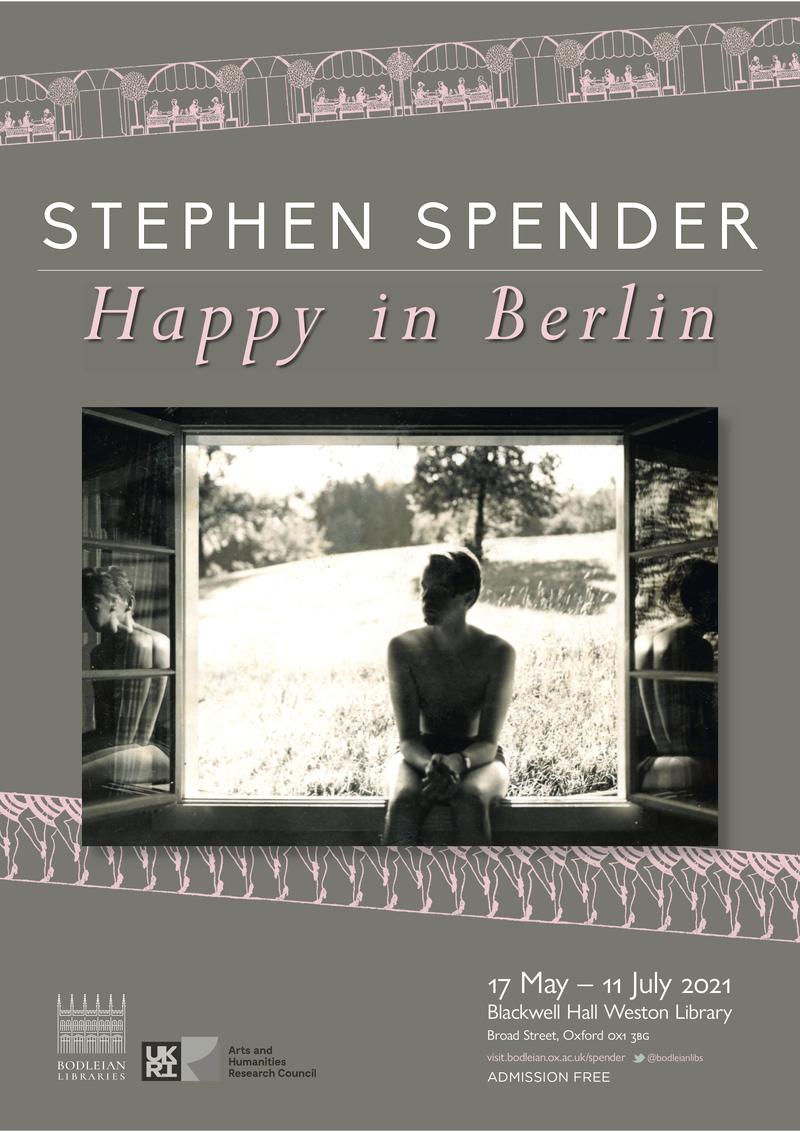 How to be happy in Berlin? A 1929 English guide told visitors what to do if they wanted to find happiness in this buzzing metropolis that now rivalled London and Paris in glamour and opportunities. That very year, also in search for happiness, Christopher Isherwood first set foot in the city with which his name would forever be linked, and which he was to turn into a myth enjoyed by audiences worldwide. What did it mean for English writers to look for happiness in Berlin? What did they seek and where did they find it in the city? How were they influenced by Berlin, and how did they, in turn, shape the city’s image for future visitors?

Isherwood’s iconic Berlin has been extensively enjoyed and scrutinised. The very prominence of his Berlin, however, has drowned the voices of many other English writers who visited the city during its international art boom in the early twentieth century. The long list included familiar and less familiar writers, ranging from the decadent poet Arthur Symons to the aristocratic diarist Evelyn Blücher, from the pacifist H.G. Wells to the Nazi-leaning Wyndham Lewis, from Rupert Brooke and T.E. Hulme to Virginia and Leonard Woolf, from psychoanalytic pioneer Alix Strachey to film enthusiasts Bryher and Kenneth Macpherson. Berlin left an important mark on all these writers. Many, but by no means all of these, visited the city in the roaring or, as they are called in German, ‘golden’ 1920s.

As we enter the centenary of the 1920s, it seems timely to look back on this complex and fascinating period. Our linked exhibitions in the Literaturhaus-Berlin, Humboldt-Universität, and the Bodleian Library, invite us to revisit Berlin through the eyes of English writers, focusing on a series of encounters that took place from the turn of the twentieth century to the onset of Nazism. We retrace the steps of English writers as they discover Berlin’s cosmopolitan cafés, avant-garde cinemas, and seedy cabaret joints, glamorous hotels and working-class districts. From these different vantage points, these passing visitors left us a series of varied and original testimonies of Berlin that complement the work of the famous German chroniclers of this age.

Today, English writers and artists are again making their way to Berlin in great numbers. They too are in search of happiness, in artistic and personal terms, following in the footsteps of their literary predecessors. During the run of the exhibition, a series of events in the Literaturhaus will explore both what the Berlin myth means one hundred years on, and its legacy on contemporary writers with a strong connection to Britain.

The exhibition at the Bodleian Library charts the political clashes between Communists and Fascists through the eyes of writer Stephen Spender. Along with W. H. Auden and Christopher Isherwood, they created a myth of Berlin as an exhilarating but fragile haven of creative and personal freedom, which was to be swept away by Hitler’s rise to power.

This display draws on archival holdings and other rare material in the Bodleian Libraries to explore this fascinating period in Stephen Spender’s life.

The exhibition ‘Happy in Berlin?’ is a collaboration between the Literaturhaus-Berlin, Humboldt-Universität, and Oxford University, which also includes an interactive website, a richly illustrated bilingual catalogue published by Wallstein Verlag, and a series of public events in Berlin and Oxford. It is scheduled to open in Oxford on 17 May, in the Literaturhaus Berlin on 15 June, and in the Humboldt Universität on 22 June 2021.

In collaboration with the Literaturhaus Berlin, the Bodleian Library, and the Stephen Spender Trust.