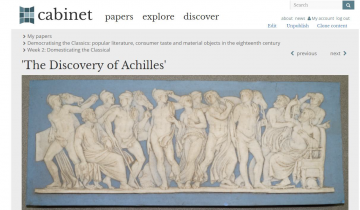 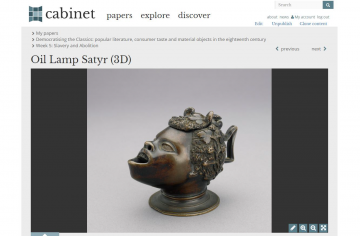 We are delighted to announce that Professor Christine Gerrard has received a Teaching Excellence Award from the Humanities Division at Oxford University, and has also won an OxTALENT award for the same course.

“I absolutely loved these lectures! Gerrard is fantastic at tying literature into historical context, particularly in terms of material culture - bringing in relevant objects that helped contextualise the texts we discussed.”

Professor Gerrard undertook an Ashmolean Faculty Fellowship at the Ashmolean Museum which enabled her to work with staff at the museum and the Oxford Internet Institute. She is an early adopter in the English Faculty at Oxford of the digital ‘Cabinet’  platform (designed to allow both staff and students to interact with museum collections in the digital environment). Professor Gerrard has developed a way of bringing museum objects to the students in virtual form, reproducing the sense of being able to encounter and manipulate them. Objects held at the Ashmolean are carefully selected, photographed in high-quality 3D form, and beautifully annotated to prompt students’ thinking and to encourage them to connect with ideas, arguments, themes, forms and styles they will be encountering through their studies.

Christine says “My aim is to revitalise the classical legacy for a generation of students who have never studied Latin or Greek and who tend to dismiss or avoid classical topics as remote or dull. This gap is particularly regrettable in the so-called ‘Augustan’ period in Britain (1660-1760), whose literature and culture is steeped in the classical past. My course is designed to help students see how the eighteenth century used the classical past to express and reflect its own preoccupations, and to show how this engagement also has relevance to the age we now live in. Topics addressed include Gender and Sexuality, and Slavery and Abolition. I wanted to show how classical influences permeated not only literature, but also art, architecture, popular culture and consumer objects. The course is designed to demonstrate that the classical legacy is not lofty or remote, but tangible and material, and that it percolated down from highbrow to lowbrow culture. Some examples I use are Thomas Howard’s Arundel Marbles, dispersed in the high cultural enclave of the Ashmolean Museum and the courting booths of Lambeth’s ‘Cupid’s Gardens’; and the famous Portland Vase, which inspired creations ranging from Keats’s ‘Ode on a Grecian Urn’ to a Wedgwood-derived ceramic chamber-pot.”