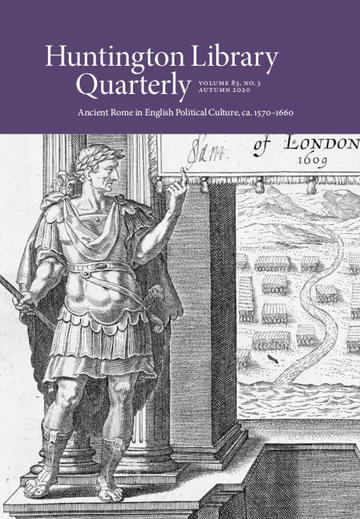 Edited by Professor Paulina Kewes, Ancient Rome in English Political Culture, ca. 1570-1660 (special issue of the Huntington Library Quarterly) is now available online via Project Muse. Ancient Rome shaped late-Renaissance intellectual experience in a host of disparate ways. The essays collected here break new ground by showing in remarkable detail the complexity, sophistication, and selectivity of that cross-cultural and transhistorical traffic. A contribution to both the wider area of classical reception and energetic debate about early modern political thought, this volume blends conceptual themes with focused case studies that expose the diverse dynamics of engagement with ancient Rome in various canonical texts (Jonsons’s Catiline and Clarendon’s History of the Rebellion, for example), or at moments of political contestation (the late Elizabethan succession controversy). It works diversely to complicate, refine, or supplement the current “republican” turn in early modern studies. Transcending a simple binary between Protestant and Catholic, it offers a more fine-grained analysis of the inflections given to Roman history, literature, and politics by different kinds of Protestant and Catholic. In short, this special issue reconsiders how the Roman heritage shaped the assumptions and attitudes of rulers and ruled from the late sixteenth century to the mid-seventeenth.