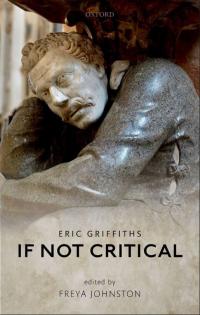 Eric Griffiths delivered hundreds of lectures at the Faculty of English in Cambridge, yet his lectures were never turned into books. If Not Critical brings together ten lectures, published here for the first time, that offer a representative selection of Dr Griffiths' original, fully-argued, and richly exemplified contributions to literary criticism and literary history.

Crammed into his writing are decades of reading in several languages and across most genres and literary periods. In these lectures, he pursues the blind spots not only of other people's arguments, but of the whole business of criticism in general, with what he calls its 'over-concentration on a narrow range of examples . . . such over-concentration warps our thinking'. Implicit and explicit throughout his work is the argument that 'an appropriately wide range of instances is essential to making progress in conceptualisation'; that what we need, in order to do better thinking, is 'a keener attention to a greater variety of examples'. Such examples include, in these lectures, the works of Shakespeare, Dante, Kafka, Beckett, Racine, Rabelais, T. S. Eliot, and Jonathan Swift.