Inside A Mountain: a new podcast series by Dr Charlie Lee-Potter 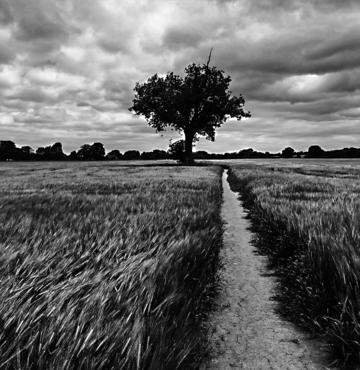 My podcast Inside A Mountain uses the act of walking to explore the creative imagination. Its name comes from writer Nan Shepherd’s wonderful phrase that ‘a mountain has an inside’. She captures the idea that understanding a landscape’s interior space is preferable to conquering a summit, winning a race, or breaking a record.

Inside A Mountain emerges from three different aspects of my working life: broadcasting, printmaking and literature. As a former foreign correspondent and presenter of BBC Radio 4’s PM, The World At One, The World This Weekend, and Open Book, I’ve always used sound to tell stories. The vital thing for me is that each podcast episode should be an intricate, immersive soundscape rather than a queue of people speaking. As a companion to the podcast, I’m writing and making etchings for a book about long-distance walking and the way that our footfall traces geometric shapes on ancient landscape. I like the idea that not only do we mark landscape as we travel across it, but that it leaves its trace on us. The Swedish neologism fotminne or ‘foot memory’ captures the idea perfectly.

Writers and artists have always used walking to summon or shape their ideas: Charles Dickens, Virginia Woolf and Franz Kafka all did it. William Hazlitt noted that Wordsworth and Coleridge even had favoured, inspirational surfaces to walk on: ‘Coleridge has told me that he himself liked to compose in walking over uneven ground, or breaking through the straggling branches of a copse-wood; whereas Wordsworth always wrote (if he could) walking up and down a straight gravel-walk, or in some spot where the continuity of his verse met with no collateral interruption.’

For Inside A Mountain’s first episode, I walked with Dr Sally Bayley. The episode is as much about the landscapes we create in our imaginations as it is about real ones. Sally’s two exquisite, mercurial books – Girl with Dove and No Boys Play Here – use a complex blend of fiction, memoir, ventriloquism and poetry to conjure a girl’s painful early life. For the recording we spent the day walking the seaside landscape of Sally’s childhood, finding the shelf in the public library where she first discovered Charlotte Brontë and the place in Lobbs Wood where she hid to read Jane Eyre.

The podcast’s second episode follows botanical artist Anna Koska as she walks along the Devon coastline looking for treasures to paint: wild garlic perhaps, seaweed, a wren’s egg, or an abandoned nest. Anna is one of very few artists to use the ancient painting method of egg tempera and we hear the sounds of her mixing egg yolk with pigment to create the rich yellow for a blackbird’s beak. There’s a recording too of Anna’s daily, icy, sea swim during which my clothes got very wet but my sound equipment stayed dry.

The latest episode is set in the fields of Gloucestershire where I walked with Dr Kate Kennedy, Associate Director of the Oxford Centre for Life-Writing. We follow the steps of poet and composer Ivor Gurney, the subject of Kate’s superb new book, Dweller in Shadows. We get lost, find a Bach fugue in a hedge, and Kate explains that Gurney didn’t just walk to soothe his mental distress or organise his thoughts. His radical idea was to represent the physical topology of landscape in a line of poetry or music so that the shape can be seen or heard.

So far, the programmes have expressed moments of pathos, sadness, even tragedy. But there’s levity too and, in any case, there are always elements of comedy in the recording of any programme. I remember broadcasting live for Radio 4 from the top of a satellite van in France. The idea was to record the first train as it emerged from the newly-opened Channel Tunnel. The weather was terrible and, just as The World at One went live, a mighty gust of wind snatched my script out of my hands, swiped my headphones off my head and knocked me off my feet. Listening back to the broadcast afterwards, there’s the gunshot crackle of flying paper, several thuds and a loud screech. But the sounds were expressive of the moment and, as it turned out, the audience loved it.

Listen to all episodes of the Inside A Mountain podcast

Dr Charlie Lee-Potter teaches English to visiting students at Hertford College. Her research interests include nineteenth-century literature, as well as the representation of catastrophe in art and literary texts. As a former BBC foreign correspondent and Radio 4 presenter, she also has an interest in literature and the spoken word.

Charlie’s recent publication, Writing the 9/11 Decade: Reportage and the Evolution of the Novel (New York: Bloomsbury Academic) was shortlisted for the University English Book Prize. She is currently writing a book about geometric shapes and landscape.