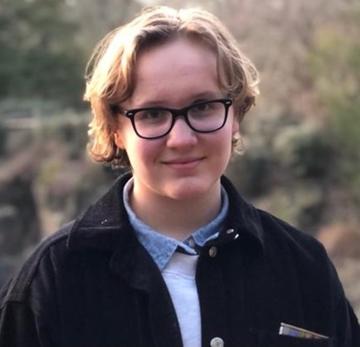 Hi there! My name is Lilya and I am a first year undergraduate studying English Language and Literature at Lincoln College. I was born in Russia but now live in West Sussex, having moved to the UK just over five years ago. One of the most important things I’ve learnt during my time at Oxford so far may sound like a cliché, but it’s the truth: how much you know going into your degree does not matter nearly as much as your willingness to think flexibly, to approach authors you would normally avoid with an open mind, and practising the ability to make connections between the texts you’re studying and wider themes that interest you. I do wish I came to this realisation sooner, as one of my earliest memories of getting an offer from Oxford was setting my eyes upon the reading list, and how overwhelmed I felt at the inevitable realisation that I will never in my life be able to read everything on it. One of my favourite things about the Oxford course is that it is very much tailored to individual interest, and even at the beginning of my first term I was given the flexibility to choose the areas that captivated me most, and to write on those themes for my tutorial essays. So if you’re in the same position that I was in last summer, don’t worry! Read as much as you can, try to spot areas that you’re excited about, and this alone should get you further than alternating between crying over the reading list and contemplating whether to burgle your nearest Waterstones.

Another thing which would have certainly helped me going into university was realising earlier that the myth of the “typical” Oxford student is just that – a myth. I have been lucky enough to meet people from all sorts of backgrounds and with a huge variety of outlooks and interests, even during the relatively short time I got to spend at university this year due to the pandemic. Also, whatever area of English Literature you’re interested in, you’re certain to get a chance to explore and expand on it during the course. For example, I’ve always thought of myself as having more of an interest in 20th century literature, but realised during our study of Victorian works that a lot of the concerns prevalent during that period still remained in the 1900s going all the way to the 21st century. Indeed, issues surrounding identity, gender and nationality can be traced all the way back to the medieval period, which was very eye-opening and thought-provoking to observe throughout my studies in first and second term. I especially enjoyed the Language and Theory paper in this respect, as it completely changed the way I think about the construction of identity. Perhaps my favourite aspect of English at Oxford is how connected it is to worldwide events, and the different stories, perspectives and viewpoints it enables us to have access to.

In terms of the application process, I think the best advice I can give is to read widely, and do your best to spot connections between texts, even if at first glance they appear to have nothing in common. Really listen to your interests and preferences, remember – no angle is too “out there” as long as you can support it, and argue in favour of it during your interview! The interview itself was my favourite part of the whole process, not only because you get to be in Oxford, but also because once you’re in the room talking to the tutors you don’t have time to be nervous. It really does feel like a conversation; the tutors are not there to catch you out, but rather to see how you think when you’re put on the spot, which is very similar to the kind of thing you’ll be doing in tutorials. And because of that, mistakes do happen! I for one still sometimes think about the thirty second silence which ensued as I desperately tried to figure out what a word meant in the poem I was given…

Although the application itself is focused around academics, that is definitely not the only part of life at Oxford. There are loads of clubs and societies to get involved in, and hopefully you won’t be like me and miss the sign-up slot and then have to chase various people over Facebook Messenger to allow you to join a society. Despite this disastrous start I am a member of the Oxford Mountaineering Club, who have regular hiking and and climbing meet-ups, one of which I attended in the first term and really enjoyed despite the typical British weather. Having enjoyed debating at school I also joined the Oxford Union. While not that many events have been happening this year due to the pandemic, I’ve had the privilege to attend a number of talks by distinguished speakers in various fields, and learned a lot about about topics ranging from whistleblowers to building cities on the Moon.

Overall, then, if you enjoy approaching and analysing a bunch of different literary texts, and making connections between fiction and the world we live in, then the Oxford course is definitely for you! I wish you the very best of luck with your application.