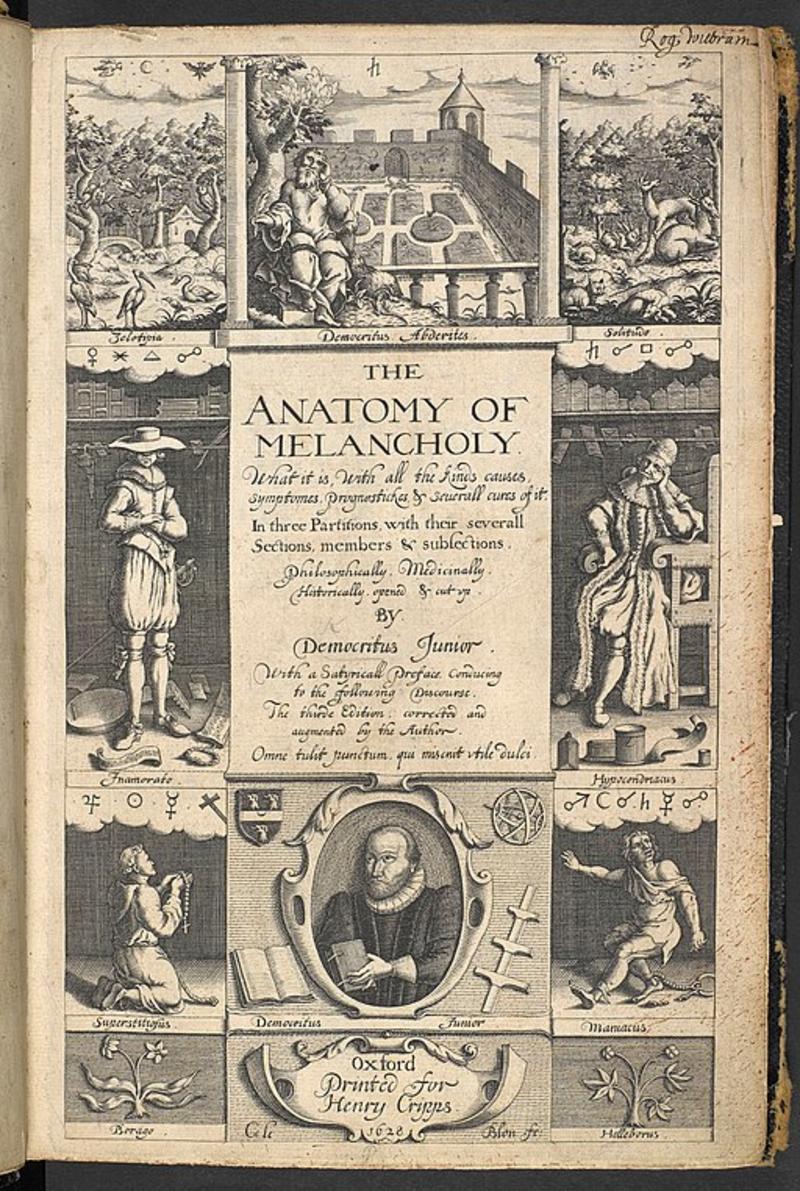 ‘Who is not a Foole, who is free from Melancholy?’, asked Robert Burton, 400 years ago, and answered his own question: ‘all the world is mad, is melancholy, dotes’. Burton’s Anatomy of Melancholy, first published in 1621, is a compendious and labyrinthine study of this universal condition, which attempts to metabolise all relevant ancient and Renaissance scholarship on behalf of the reader. A new Bodleian exhibition, curated by Dr Kathryn Murphy, Associate Professor in the English Faculty, and a team from the Department of Psychiatry, celebrates the Anatomy at 400, and explores the contemporary resonances of his sprawling investigation of the causes, symptoms, and cures of emotional distress. Burton was himself an early user and a donor to the Bodleian, and the exhibition uses the collections to show parallels and contrasts between early modern and contemporary cures for melancholy.

Melancholy was a medical matter for the Renaissance: a disease resulting from the excess of black bile, the substance melancholy, in the body. Sir William Osler, a Canadian physician who was Regius Professor of Medicine at Oxford, described the Anatomy in 1909 as ‘a medical treatise, the greatest indeed written by a layman’. But as a medical treatise, it is eccentric. If melancholy is the whole world’s malady, then nothing is irrelevant, and the Anatomy exhibits the world-swallowing encyclopaedic ambition of the Renaissance. It includes a satirical preface in the persona of Democritus Junior, named in honour of the ‘laughing philosopher’ of the ancients; proliferating anecdotes; digressions on cosmology, geography, sex, tobacco, utopian government, and the miseries of scholars; and copious quotation from poets and playwrights. It was Burton’s life’s work: after its first publication, it went through five further editions, each expanding on the last, until the final, posthumous version of 1651 was 771 pages and over half a million words long.

Four hundred years have dramatically changed our ways of thinking and talking about the causes, symptoms, and cures of mental illness. Burton’s understanding of the physiology of melancholy rested on the theory of the four humours, and on astrology; he included supernatural causes like witches and demonic possession, and cures like bloodletting, amulets, and precious stones. Yet this exhibition shows surprising ways in which Burton’s capacious concepts of cure anticipate contemporary research into the conditions of mental wellness, and means of support in crisis. Burton represents an early modern understanding of the porousness of mental and physical phenomena which is currently explored in research into the connections between mental health and the gut. His emphasis on remedies which involve changes to sufferers’ circumstances and activities – on diet, air, exercise, study, sleep, company, laughter, friends, and music – anticipate contemporary interest in social prescribing, lifestyle remedies, and cures other than the pharmaceutical.

The exhibition also recognizes in the Anatomy a forerunner for contemporary attention to the therapeutic potential of reading and writing. Burton was himself susceptible to melancholy, and writing was a solace: ‘I write of melancholy’, he claimed, ‘by being busy to avoid melancholy’. The Anatomy is a testament to personal experience, and a kind of self-cure. But since Burton could assume a universal susceptibility to melancholy, the reader, too, is implicated. He tells the reader that ‘Thou thyself art the subject of the discourse’. You are encouraged to learn not only about melancholy, but about yourself, as you read. It is a personal and interpersonal book, offering the reader practical help, solace, and distraction.

The Anatomy has always found readers to testify to its efficacy. Samuel Johnson declared it was the only book that could get him out of bed two hours early. John Ford and John Keats mined it for inspiration, and Charles Lamb loved Burton’s erudition. Laurence Sterne lifted passages wholesale and uncredited for Tristram Shandy. More recently, Sir Philip Pullman has discussed his love for the Anatomy’s style and wit.

The exhibition was planned before the pandemic, but the experiences of the last 18 months have only intensified its resonance. Burton’s closing injunction to the reader is ‘Be not solitary, be not idle’. In a time when we have all faced a lack of social contact, and some an enforced lack of activity, Burton’s various methods for salving the anxieties of solitude and idleness are unexpectedly relevant: chief among them the absorbing, various, distracting experience of reading the book itself.

‘Melancholy: A New Anatomy’ opens on 29 September 2021 at the Treasury, Weston Library. Admission is free. Find out more on the Bodleian Libraries website.