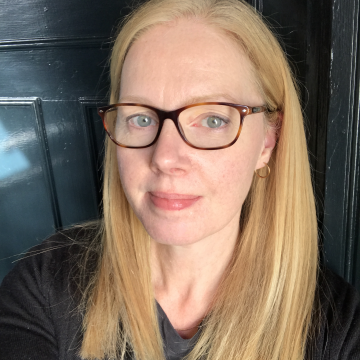 Lisa is working on a book which takes a fresh look at the novels and journalism of George Orwell, through the lens of his painful and complicated medical history. The book argues that the very language that Orwell used to unpick the structures of poverty and power was deeply rooted in his many uncomfortable experiences of being a patient.

Lisa’s previous work has been on narratives of the uncanny in post-World War II literature and culture, and on the way medical objects and technologies read and write on the human body. She is currently a Junior Research Fellow at Worcester College, and before that she studied and worked at Birkbeck, University of London.

She is really pleased (and surprised) to be chosen and is looking forward to some fantastic opportunities to talk to about her work to a wider audience. She will be appearing at the Free Thinking festival in Gateshead to talk about her research, and this will be broadcast on Radio 3 some time after Easter.

About the New Generation Thinkers scheme:

This pioneering scheme aims to develop a new generation of academics who can bring the best of university research and scholarly ideas to a broad audience through working with the media. It’s a chance for early career researchers to cultivate the skills to communicate their research findings to those outside the academic community.

Each year, up to 60 successful applicants have a chance to develop their media skills, including programme-making ideas with experienced BBC producers at a series of dedicated workshops.

Of these, up to ten are selected as New Generation Thinkers, which includes working with BBC Radio 3 and benefiting from a unique opportunity to develop their own programmes for the station and a chance to regularly appear on air. There will also be the possibility of working with BBC TV, a number of speaking opportunities and the chance to become a regular blogger.