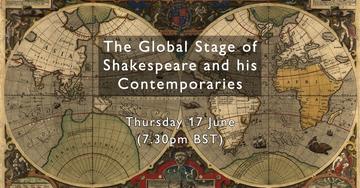 To mark the anniversary of Shakespeare’s birth, Jesus College announced the next event in their ‘Celebrating the Elizabethan College’ strand, part of the year-long programme of events that celebrate the College's 450th anniversary. The strand has been curated by Helen Morag Fellow Professor Paulina Kewes and features current and former English students.

The Global Stage of Shakespeare and his Contemporaries (17 June, 19.30 BST) will feature some of the finest actors from across the University, and explore how Shakespeare and his contemporaries depicted new, old, and imaginary worlds, exotic peoples and fellow-Europeans, voyages of discovery and travels of the mind. Rife with battles, treachery, greed, and romance – and with a cameo by Jesus College's founder, Queen Elizabeth I herself – these scenes will be introduced by Dr Brandi Adams, incoming Assistant Professor of English at Arizona State University, whose path-breaking research centres on the presentation of race on the Early Modern stage.

The performances will be directed by current Jesus DPhil student, Lucy Clarke, and Alumni Engagement Manager, Dr Peter Sutton, with textual editing by former Jesus DPhil student and now Head of Sixth Form, Dr Simon May (2010, English), and his quondam supervisor Professor Paulina Kewes. Our compère will be 2nd year English student and Co-President of the Herbert English Society, Kaitlin Horton-Samuel. We will also hear from alumna Clare Williams (2005, English) and Simon May, who will share their thoughts on teaching Shakespearian drama and race in schools.

The Global Stage of Shakespeare and his Contemporaries will also herald Jesus College's new Shakespeare Access Project, which they hope to launch in Michaelmas 2021. There will be more information about this new initiative in this summer’s Jesus News. Later in the summer they will also publish a set of innovative digital resources – maps, extracts, lesson plans, accessible overviews – aimed at schoolchildren and teachers. Those will be prepared by Simon May and current Jesus DPhil student, Felicity Brown (creator of the prize-winning app WillPlay).

Bookings for The Global Stage of Shakespeare and his Contemporaries will open in mid-May and further details will be released at that time.