Part of The Cambridge Edition of the Works of Virginia Woolf 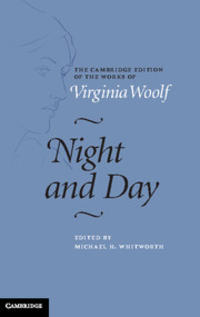 A romantic comedy in which the central characters have a distinctly unromantic disposition, Night and Day was Virginia Woolf's second novel. Written during the First World War, the novel is set in the suffrage campaign of the pre-war years. Often understood as a deliberate exercise in classicism, it has been neglected by critics drawn to Woolf's later more overtly experimental fictions. This edition provides a substantial introduction, which traces the chronology of the novel's composition and publication, and which draws on previously neglected sources to trace its reception. Its extensive explanatory notes clarify the novel's relation to Woolf's reading and to the literary, cultural, and historical context of its time, with attention both to the time of its setting and its composition. Maps locate the key settings in London and England. The introduction and textual apparatus trace the complex history of the impressions and editions issued during Woolf's lifetime.