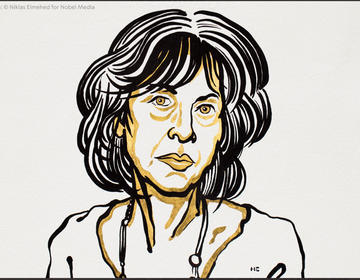 American poet Louise Glück was announced as the winner of the 2020 Nobel Prize for Literature last week.

Dr Erica McAlpine, Associate Professor in the English Faculty, is an expert on poetry in the 19th, 20th and 21st centuries. She is currently working on a book, The Poet's Mistake, that explores the nature of errors in poems and how critics have responded to such errors in complicated ways. She is also a practising poet and translator. So who better to comment on yesterday's news?

"Glück’s voice is stark, accessible, and always shifting—each of her many books registers a stylistic change without letting go of its underlying quality," she said. "Since she began publishing poetry more than fifty years ago, her writing has managed to feel urgently contemporary and yet simultaneously timeless."

"The occasional bleakness of her voice speaks especially well to our present moment; and yet her poetry has always been intimately connected to the long lyric tradition behind it. Her poems are both universal and personal," she said. "In them, love, loss, desire, and beauty wear the specific dress of her own life while turning the everyday into something mythical."

Professor Elleke Boehmer is an award-winning novelist and former judge of the Man Booker International Prize, as well as being Professor of World Literature at Oxford. She was delighted by the choice of the Nobel panel. "It is exciting to see the Nobel Committee recognise women's poetry in the award of the Prize to the tenaciously personal, always deeply human and questing Louise Gluck," she said.

"She is one of only two women poets by my reckoning to have been recognised by the Nobel in this way, and she is an immensely worthy winner. She speaks from the deep underworld we all inhabit in our dreams."

Dr McAlpine also spoke to Reuters and Professor Boehmer was interviewed by Al Jazeera. You can read more about Louise Glück in the New Yorker.