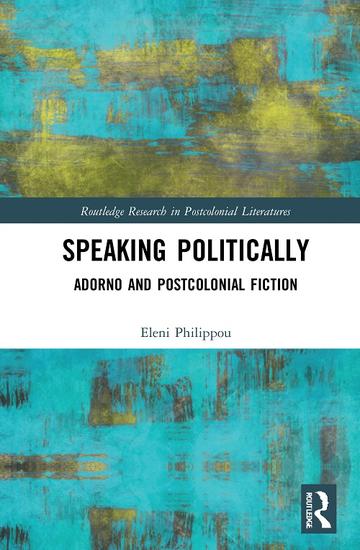 In this monograph Theodor Adorno’s philosophy engages with postcolonial texts and authors that emerge out of situations of political extremity – apartheid South Africa, war-torn Sri Lanka, Pinochet’s dictatorship, and the Greek military junta. This book is ground-breaking in two key ways: first, it argues that Adorno can speak to texts with which he is not historically associated; and second, it uses Adorno’s theory to unlock the liberatory potential of authors or novels traditionally understood to be "apolitical".

While addressing Adorno’s uneven critical response and dissemination in the Anglophone literary world, the book also showcases Adorno’s unique reading of the literary text both in terms of its innate historical content and formal aesthetic attributes. Such a reading refuses to read postcolonial texts exclusively as political documents, a problematic (but changing) tendency within postcolonial studies.

In short, the book operates as a two-way conversation asking: "What can Adorno’s concepts give to certain literary texts?" but also reciprocally, "What can those texts give to our conventional understanding of Adorno and his applicability?" This book is an act of rethinking the literary in Adornian terms, and rethinking Adorno through the literary.