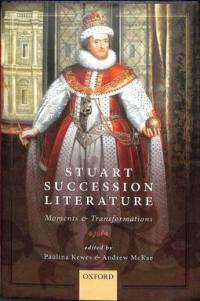 Moments of royal succession, which punctuate the Stuart era (1603-1714), occasioned outpourings of literature. Writers, including most of the major figures of the seventeenth century from Jonson, Daniel, and Donne to Marvell, Dryden, and Behn, seized upon these occasions: to mark the transition of power; to reflect upon the political structures and values of their nation; and to present themselves as authors worthy of patronage and recognition. This volume of essays explores this important category of early modern writing. It contends that succession literature warrants attention as a distinct category: appreciated by contemporaries, acknowledged by a number of scholars, but never investigated in a coherent and methodical manner, it helped to shape political reputations and values across the period. Benefitting from the unique database of such writing generated by the AHRC-funded Stuart Successions Project, the volume brings together a distinguished group of authors to address a subject which is of wide and growing interest to students both of history and of literature. It illuminates the relation between literature and politics in this pivotal century of English political and cultural history. Interdisciplinary in scope, the volume will be indispensable to scholars of early modern British literature and history as well as undergraduates and postgraduates in both fields.