Textual Awareness: A Genetic Study of Late Manuscripts by Joyce, Proust, and Mann 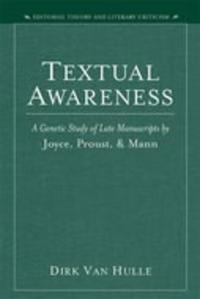 Textual Awareness analyzes the writing process in Finnegan's Wake, Remembrance of Things Past, and Doctor Faustus (works in which time itself appeared as a theme) and relates these to Anglo-American, French, and German editorial theories. After a theoretical examination of the relationship between genetic and textual criticism, Dirk Van Hulle uses the three case studies to show how and why the texts proceeded the way they did-when, at each stage in the writing process, they had the potential to become something entirely different.