The Oxford Edition of the Sermons of John Donne

Volume I: Sermons Preached at the Jacobean Courts, 1615-19 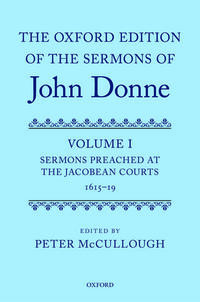 The latest volume to be published in The Oxford Edition of the Sermons of John Donne, which presents the largest prose output of one of the most celebrated poets and preachers of the seventeenth century. The edition provides freshly edited texts arranged by place of delivery instead of (often speculative) chronology, and offers a wealth of explanatory material for specialist and non-specialist readers alike. This volume contains the eleven sermons preached by Donne at the court of James VI & I, between Donne's ordination in 1615 and his departure with Viscount Doncaster on a diplomatic embassy to Germany. It includes the first surviving sermon by Donne, here reattributed to the court at Greenwich; the only extant sermon preached for Queen Anne of Denmark; and one of Donne's most admired orations on death and resurrection. In each case an authoritative text has been established by freshly collating multiple copies of the seventeenth-century print editions and contemporary manuscripts. The Introduction describes the institutional and physical context of Donne's early Jacobean court sermons and analyses his style of preaching and doctrinal positions. For the first time, the sermons appear with a full critical apparatus: headnotes to each sermon describe its textual state and supply local historical context and suggestions for further reading, while extensive commentaries trace Donne's use of his sources, translate passages in foreign languages, and gloss important and unfamiliar words.