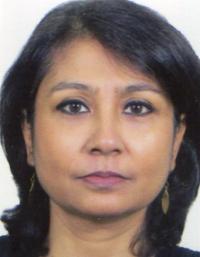 We are delighted to welcome Professor Rosinka Chaudhuri who is joining us as a Mellon Visiting Professor for this term and part of next. She is here under the auspices of the TORCH Global South visiting scheme. Professor Chaudhuri is very happy for students working in her fields of expertise (see details below) to get in touch. She can be reached via the English Faculty office.

Please also join us at St Hugh’s College (Maplethorpe Seminar Room) on Thursday, 9 November at 5pm  (Week 5) for a workshop entitled ‘World Literature: For and Against’. On this occasion Professor Chaudhuri will be joined by Elleke Boehmer (Oxford), Peter McDonald (St Hugh’s), Pablo Mukherjee (Warwick) and Stefan Helgesson (Stockholm). Each speaker will give a short statement outlining her or his take on this particular debate, though the main purpose of the workshop is to provide a forum for students and colleagues to contribute to a wider discussion about world literature today.

Rosinka Chaudhuri is Director and Professor of Cultural Studies at the Centre for Studies in Social Sciences, Calcutta (CSSSC).

Her books include Gentlemen Poets in Colonial Bengal: Emergent Nationalism and the Orientalist Project (Seagull: 2002), Freedom and Beef-Steaks: Colonial Calcutta Culture (Orient Blackswan: 2012) and The Literary Thing: History, Poetry and the Making of a Modern Literary Culture (Oxford University Press: 2013, Peter Lang: 2014). She has also edited Derozio, Poet of India: A Definitive Edition (Oxford University Press, 2008), and, with Elleke Boehmer, The Indian Postcolonial (Routledge, 2010). Her most recent publication is A History of Indian Poetry in English, published by Cambridge University Press, New York, in 2016.

In addition she has translated and introduced the complete text of the letters Rabindranath Tagore wrote his niece Indira Debi as a young man, calling it Letters from a Young Poet (1887-94) (Penguin Modern Classics, 2014). Currently, she is editing and introducing An Acre of Green Grass: English Writings of Buddhadeva Bose for Oxford University Press, New Delhi. Her present research is tentatively titled Young Bengal and the Empire of the Middle Classes.

Her work lies at the intersection of literature and history, in the area broadly known as Cultural Studies. She has worked on the nineteenth-century literary sphere in Bengal, looking at the formation of a modern cultural sphere in the context of episodes surrounding the writing of poetry; on Tagore, his translations from the Bengali Gitanjali as well as the incantatory musicality of his Bengali poetry; on Indian poetry in English, introducing the tradition and its development; and on Postcolonial Studies, on which she has a revisionist take. Currently she is thinking about the category into which the polemic of Postcolonial Studies seems to have retreated: World Literature, and wondering where the 'world' in World Literature is.