"My love of reading started at a very early age and I was greatly encouraged by my family. I went to a comprehensive school in Coventry and didn’t particularly excel, though I enjoyed English and also got involved in the drama club (leading to performing at the National Theatre as part of a youth theatre competition).

My route to Oxford wasn’t at all typical. I had various jobs after leaving school but when I was working in the academic bookshop at Warwick University I realised I hadn’t quite left my love of literature behind me and would often talk to the lecturers about the novels on their reading lists. One lecturer asked me once “Why aren’t you doing my course?” – and that got me thinking!

As a mature (by this point) student it was recommended to me that I do an Access to Higher Education course before I applied as it had been a few years since my A levels. So I studied at a local FE college 2 nights a week for 2 years. By the end of the 1st year I had achieved the equivalent kitemark points to 3 As at A level (much better than my original grades!).

My aim was to either go to Warwick or Brookes but whilst filling in my UCCA and PCAS forms (there were still Polytechnics back then!) one of my tutors on the course saw me looking at both prospectuses and said “What about Oxford?”… After I stopped laughing and she pointed out my grades were good enough I plucked up the courage to browse the University prospectus (keeping Brookes on the table too just in case!). As soon as I spotted the section on Harris Manchester (mature student college taking undergraduates reading for their first degree) I knew this was the place for me. At the ripe old age of 25 I didn’t want to be living in accommodation with 18 year olds but also felt like I’d be a very small fish in a very big pond surrounded by people who I felt were far more worthy of their places.

Back then we had to submit an essay with the application form, then sit 2 entrance exams (a 2 hour general paper and a 3 hour literature paper), and finally if you were one of the lucky ones you were called back for the interview stage. I felt very lucky to be taking part at both of these stages and thought if nothing else I had at least been privileged to see the inside of a college and meet some of the academics whose books I had read.

In reality, Oxford isn’t at all intimidating once you get here and I found both students and tutors alike to be very friendly and encouraging. Though I have to say I was terrified before my first tutorial! I soon settled into the idea that I had to read out my essays each week and quickly started to enjoy debating my ideas with my tutors on a one-to-one basis.

I even started rowing (a shock to everyone who knew the previous non-sporty me) and as this was an affiliation with Hertford I spent quite a bit of time across the road in that college too and felt equally at home in both places.

Harris Manchester is a unique College and I had some amazing times during the three years I was there. I still have strong attachments to College and love visiting on a regular basis.

I now work in the Proctors’ Office as PA to the Proctors and Assessor and office manager. I’ve been here for 10 years and prior to this worked at Pembroke in the Academic Office.

I’m also Bedel of Arts (Ceremonial Officer of the University) which is an 800 year old post and I’m only the third (full-time) female Bedel.

I can honestly say that as someone who didn’t even have to wear school uniform past the age of about 13, I didn’t expect to enjoy wearing sub fusc so much that I now dress in it regularly when on official ceremonial duties!

I still have mild imposter syndrome but I think that stems more from the feeling that I have been incredibly lucky to have been a student here and to be part of the University to this day.

I would strongly encourage anyone thinking about it to apply. There is a place for you at Oxford even if you think you won’t fit in. Good luck!" 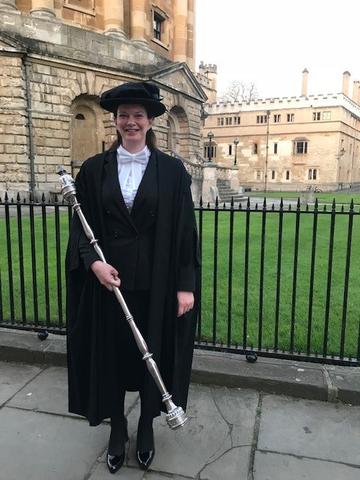 Joint Honours: Not just for when you can’t make your mind up!

'It's never too late'