The Norton Critical Edition of Wordsworth's Poetry and Prose 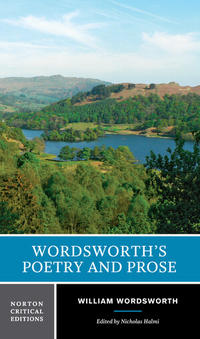 The most accessible edition of Wordsworth’s poetry and prose, prepared to meet the needs of both students and scholars.

This Norton Critical Edition presents a generous selection of William Wordworth’s poetry (including the thirteen-book Prelude of 1805) and prose works along with supporting materials for in-depth study. Together, the Norton Critical Editions of Wordsworth’s Poetry and Prose and The Prelude: 1799, 1805, 1850 are the essential texts for studying this author.

Wordsworth’s Poetry and Prose includes a large selection of texts chronologically arranged, thereby allowing readers to trace the author’s evolving interests and ideas. An insightful general introduction and textual introduction precede the texts, each of which is fully annotated. Illustrative materials include maps, manuscript pages, and title pages.

The volume also includes a Chronology, a Biographical Register, a Selected Bibliography, and an Index of Titles and First Lines of Poems.