In a lengthy opinion piece in the Financial Times, Booker-Prize-winning Indian author-activist Arundhati Roy, whose one-thousand-page volume of political non-fiction, My Seditious Heart, was published last year, offered a shrewd assessment of how Covid-19 has exposed and widened the inequalities that cut across capitalist societies. Nonetheless, Roy ends on a hopeful note. Proposing that the crisis “offers us a chance to rethink the doomsday machine we have built for ourselves,” she prophetically envisions the pandemic as a “portal” for us to “walk through lightly, with little luggage, ready to imagine another world” (3 April 2020). While celebrities from other entertainment industries and sports have drawn criticism for their public interventions during the corona crisis in what amounts to a systemic critique of celebrity culture itself, writers’ authority as moral compasses and voices of reason has emerged fully intact. This points towards a long tradition of authors using their public profiles and cultural capital to draw attention to a wide range of socio-political concerns and to act as acute critics of the zeitgeist, appealing to the political, moral, and social conscience of their readership.

Growing out of a two-day conference cancelled due to Covid-19, this series of webinars explores the intersections of authorship, politics, activism, and literary celebrity across historical periods, literatures, and media. Interrogating the ideological dimension of literary celebrity and highlighting the fault-lines between public and private authorial selves, ‘pure’ art, political commitment, and marketplace imperatives, this series joins current debates on authorship and literary value. It brings together writers, academics, literary activists, and industry stakeholders to explore the wider implications of authors’ political responsibilities and cultural authority in today’s heavily commodified literary marketplace and age of celebrity activism.

This series of webinars is convened by Sandra Mayer (University of Vienna / Oxford Centre for Life-Writing, sandra.mayer@wolfson.ox.ac.uk) and Ruth Scobie (Mansfield College, Oxford, ruth.scobie@ell.ox.ac.uk), and is supported by the Austrian Science Fund (FWF) and The Oxford Research Centre in the Humanities (TORCH) in collaboration with The Oxford Centre for Life-Writing (OCLW), Postcolonial Writers Make Worlds, and The Stephen Spender Trust. 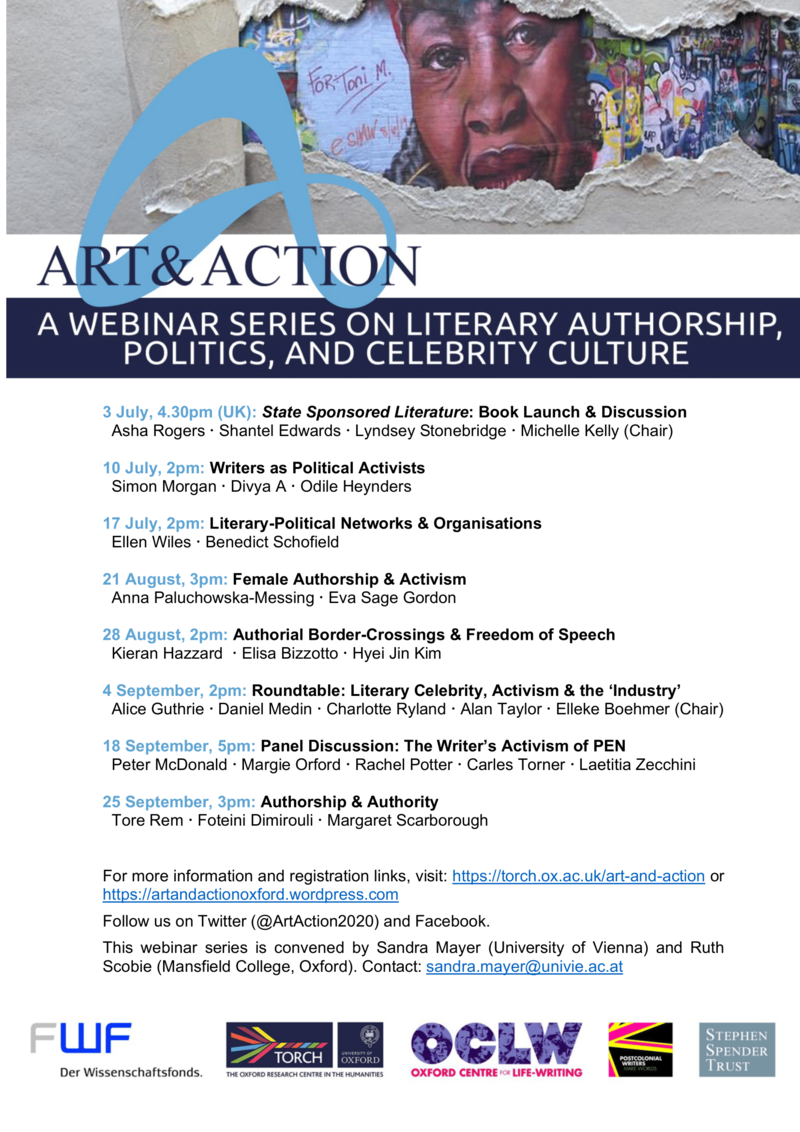