Clarendon Lecture 1: The Enrag’d Musician, and other Street Scenes

Prof Daniel Karlin, Winterstoke Professor of English at the University of Bristol

These lectures are about the use made by writers in the ‘long nineteenth century’ of songs that were sung on the streets of cities. They included ballads, folk songs, and popular songs from opera to music-hall, but also the cries of street vendors and, by metaphorical license, the ‘song’ of a tramway or a knife-grinder’s wheel. Such songs formed part of the urban ‘soundscape’, and offered many writers a rich expressive and symbolic resource; writers also responded to the challenge of a rival art, one that could claim to ‘voice’ the city more potently than writing. In this sense the presence of street songs in novels and poems belongs to a larger cultural history, that of the perpetually difficult, unstable, unbreakable marriage of voice and text.

With the exception of the first lecture, which will contain some contextual and theoretical material, the lectures will focus on the close reading of selected literary works.

Lecture 1 – The Enrag’d Musician, and other Street Scenes 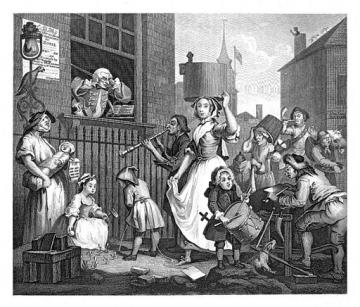 The first lecture is introductory and contextual. What is a street song? What place does it occupy in the history, and literary history, of the urban ‘soundscape’? What kinds of appropriation have writers made of this rich material? The account will be illustrated by examples from both literature and graphic art, beginning with Hogarth’s famous print ‘The Enrag’d Musician’ and taking in passages from works poets and novelists including William Wordsworth, James Clarence Mangan, Elizabeth Barrett Browning, Charles Dickens, George Gissing and Virginia Woolf. The lecture will conclude with a discussion of Robert Browning’s ‘Fra Lippo Lippi’, in which a form of Tuscan popular song, the stornello, journeys from the country to the city and falls into the unscrupulous hands of the painter who ‘speaks’ the poem—and of the poet who wrote it.

Other lectures in the series

17 November The Poet and the Knife-grinder