Mercury’s Perihelion and The Donald 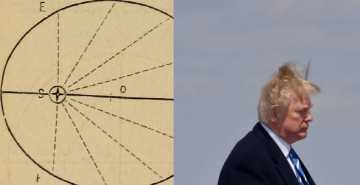 What do the perihelion of Mercury (the point at which the planet is closest to the Sun) and President Donald Trump have in common? Both exposed deep flaws in the way we had come to explain and understand the world. Newtonian physics failed to predict Mercury’s perihelion accurately. Political journalists failed to predict President Trump’s election victory.

Following on from Mercury’s perihelion, Newtonian physics was increasingly found wanting. Further "failures" were uncovered. It was clear the theory was flawed. The result was a revolution in the way physicists explained and understood how the natural world worked. That revolution culminated in Einstein’s theory of relativity. Thomas Kuhn in his book Structure of Scientific Revolutions identifies this as an instance when science undergoes a paradigm shift. The old way of understanding the world – the Newtonian paradigm – is replaced by a new one: Einstein’s.

In this lecture, I shall argue that it is time for a revolution in the way the media covers politics. We didn’t just get Trump’s election wrong. We failed to predict Corbyn’s victory; we failed to predict the Brexit Referendum result; we failed to predict the Theresa May Election. Many argue that these failures were due to faulty polls or myopia among the chattering classes. Others argued, for example with the EU referendum, that the failure to predict the result was due to broadcasters treating the Leave and Remain campaigns equally, thus allowing the lies of the "Leave" campaign to mislead voters. If Thomas Kuhn was here, he would recognise these attempts to find reasons for getting it wrong: it’s what scientists did for decades after the first flaws were identified in Newtonian physics.

I will argue that current political coverage is in a similar position. We are trying to find reasons for our getting it wrong but seeking explanations within the same framework of understanding. My contention is that these attempts to account for getting it wrong about Trump, Corbyn, Brexit are themselves doomed to fail. Because the cause goes much deeper: it is to do with the very way we journalists conceptualise the world. We see – and have now seen for almost 200 years – the political world in terms of Left and Right. Ever since Marx’s brilliant insight into capitalism, we have examined the world in terms determined and defined by the Marxian paradigm of class conflict. It has, of course, been a startlingly successful way of explaining and understanding the world. But its limitations are beginning to show. Our coverage of the political, our inability to explain and understand what’s going is vivid testimony to the need for a new way of conceptualising the world. In the words of Thomas Kuhn, it is time for a paradigm shift.

Followed by a drinks reception in the English Faculty