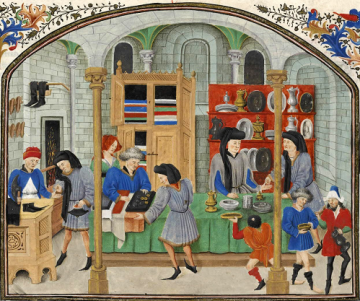 Among the large corpus of Welsh poetry composed in the fourteenth and fifteenth centuries, there are numerous references to material commodities indicative of the commercial culture of the new towns of Wales. A notable subset of these commodities are textiles. Birds are described as wearing lifrai, ‘livery’, or dwbled o blu, ‘a doublet of fur’, women are dressed in mwre, ‘murrey’, and sgarlad, ‘scarlet’, types of luxury imported cloth.

This lecture examines some of these references to textiles and evaluates their social and linguistic significance as a key to understanding multilingualism and commercialisation in late-medieval Wales.

Helen Fulton is Professor of Medieval Literature at the University of Bristol. She has published widely on medieval Welsh literature in its social and political contexts, with particular reference to relationships between Wales and England in the late Middle Ages. Her most recent publications include the edited collections Urban Culture in Medieval Wales (2012) and Anglo-Italian Cultural Relations in the Later Middle Ages (2018). She is the co-editor of The Cambridge History of Welsh Literature, to appear early in 2019.