Spotlight on Research: Letter-writing and the OED 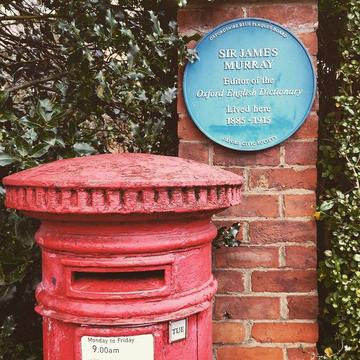 During his editorship of the Oxford English Dictionary (OED), J. A. H. Murray (1837-1915) posted so many letters in pursuit of his inquiries that the Post Office installed a pillar box outside his house at 78 Banbury Road, Oxford. Writing and receiving letters was a core feature of Murray’s work on this revolutionary new dictionary, published in instalments by Oxford University Press between 1884 and 1928. Much of the resulting correspondence, perhaps 5,000 documents in all, now occupies the best part of 9 linear metres of shelf space in the Bodleian Library.

The Murray Papers were donated to the library in 1994 by Murray’s grand-daughter K. M. E. Murray, who had used them to write a best-selling biography of her grand-father published in 1977, Caught in the Web of Words. Apart from vividly testifying to the OED’s status as a largescale collaborative enterprise, the letters are a unique and invaluable resource for researchers of late nineteenth- and early twentieth-century English language and literature, the social and intellectual networks of the OED’s compilers, and the late modern history of linguistics and other disciplines.

Much of the basic linguistic research for the OED—establishing when a word had been first used, and how its sense(s) had subsequently developed—rested on the work of volunteer readers from all over the British Isles as well as continental Europe, the United States, and Australia. These people all communicated with Murray by post to discuss and dispatch the quotation slips they produced from their reading of publications of all types and dates, the ‘raw material’ of the dictionary, as Murray put it, from which the dictionary was eventually constructed.

In addition, Murray built up a vast network of contacts whose advice and expertise was crucial for the creation of the dictionary. As he himself said, ‘a lexicographer if he wants to be accurate, has to be a universal enquirer about everything under the Sun, and over it’, and the sheer range of people he exchanged letters with is remarkable. He wrote to professional experts in all imaginable fields of knowledge: botany, astronomy, anthropology, mathematics, engineering, architecture, the arts, business and commerce, and many others. He exchanged letters with a local Oxford builder (Thomas Kingerlee) on the size of bricks, but he also wrote to prime ministers (Gladstone and Asquith), to poets and writers—George Eliot, Swinburne, Tennyson, Thomas Hardy amongst others—and to numerous fellow academics and philologists who worked both inside and outside universities, including colleagues and acquaintances he saw regularly in Oxford and who sometimes lived just a few streets away, for example Joseph Wright (of Kingston Road and ultimately Banbury Road), editor of the six-volume English Dialect Dictionary (1898-1905).

In all cases, Murray wanted to find out and discuss what words meant, how they had been used in particular instances (sometimes by the person he was writing to), how they were pronounced, what their etymology and history were, and when they had first come into the language. As a result, the first edition of the OED was the most comprehensive dictionary of English vocabulary to date, not just of words in British English but of other English-speaking regions too.

Individual letters from the Murray Papers have been quoted in several articles and monographs on the history of the OED and its compilers (including my Treasure-house of the Language: The Living OED, 2007, and OED research website, Examining the OED, which is supported by the English Faculty), but the correspondence has never been systematically edited or published. I’ve recently received funding from the British Academy and Leverhulme Fund to create a pilot edition of this phenomenally rich archival source, which I’m working on with Dr Stephen Turton, a former intern at today’s OED who was awarded his DPhil in historical lexicography by the English Faculty in September 2020. Stephen is off to a research fellowship at Gonville & Caius College, Cambridge, in October 2021, but—as the pandemic has taught us all—distance is no hindrance to academic research and collaboration.

Our initial selection of letters will be made freely available at https://murrayscriptorium.org in early 2022, with a view to expansion over the next few years to support scholarly and popular interest in the OED as it approaches its 2028 centenary. We’re also planning an accompanying display at the Bodleian Library, focussing on one of the many appeals to the public that the OED has made over the years, in this case for information about the pronunciation of the words content and contents, which Murray found varied strikingly both geographically and between young and old speakers. If you’re visiting Oxford in April, be sure to drop by the Bodleian to see it.