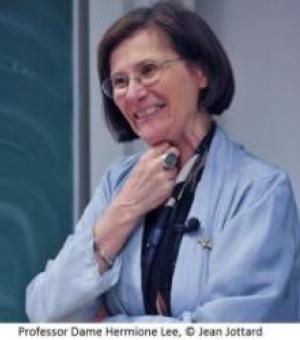 My main work is in biography and life-writing studies. Since moving from the Goldsmiths’ Chair in 2008 to be President of Wolfson College, I have published Biography: A Very Short Introduction, OUP, 2009, reprinted 2011, and Penelope Fitzgerald, Chatto & Windus, 2013, a biography of the English novelist and biographer, which won the James Tait Black Award for Biography.

Recent essays, prefaces, reviews and interviews include: “In Separate Directions: Ford Madox Ford and French Networks”, in Ford Madox Ford, France and Provence, Rodopi, 2011; “Introduction”, Alain-Fournier’s The Lost Domain, OUP, 2013; “Learnt by Heart: William Trevor and Reading”, in William Trevor: Revaluations, MUP, 2013; “From Memory: Literary Encounters and Life-Writing”, in On Life-Writing, ed Zachary Leader, OUP, 2015; “The Art of Biography”, Paris Review, Summer 2013; “Foreword”, Isaiah Berlin’s Personal Impressions, Princeton UP, 2014; “Dangerous Letters: A Biographer’s Perspective”, in Letter Writing Among Poets, ed Jonathan Ellis, Edinburgh UP, 2015; “Breaking Faith: Elizabeth Bowen and Disloyalties”, in Uncertain Futures: Essays About the Irish Past for Roy Foster, ed Senia Pašeta, OUP, 2016; “What Can I Say?” Interview with Alan Hollinghurst in Alan Hollinghurst: Writing Under the Influence, eds Michèle Mendelssohn and Denis Flannery, MUP, 2016, and reviews for the New York Review of Books on Alice Monro, Colm Toibin, Stevie Smith and Jenny Diski. My books on The Novels of Virginia Woolf (1977) and Philip Roth (1982) were reissued in the Routledge Revivals series, with new introductions, in 2010. I am currently working on a biography of Tom Stoppard.

I am the Director of the Oxford Centre for Life-Writing at Wolfson College, with the support of the English Faculty.  OCLW runs a full programme of lectures, workshops, conferences, visiting scholarships and graduate scholarships. (See www.wolfson.ox.ac.uk/oclw).

I have taught numerous courses on biography and life-writing for undergraduates and graduates and currently teach an MSt option on Life-Writing.

I am a Fellow of the Royal Society of Literature, the British Academy and the American Academy of Arts and Sciences, and an Honorary Fellow of New, St Hilda's, and St Cross Colleges, Oxford. I am a trustee of the Wolfson Foundation. I hold Honorary Doctorates from Liverpool and York Universities and King’s College London.