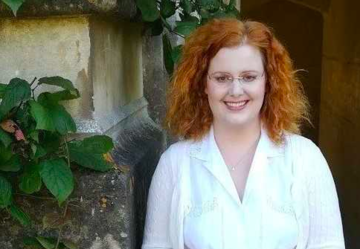 MA in English Literature and Linguistics (University of Vienna)

BA in English Literature and Linguistics (University of Vienna)

BA in History of Art (University of Vienna)

My doctoral thesis explored the apophatic understanding of the divine, the self, and nothingness through the lenses of love and dread in Julian of Norwich's Revelations and related late-medieval contemplative and devotional texts. It was supervised by Prof Vincent Gillespie and fully funded by the AHRC and Scatcherd Scholarship. Prior to my DPhil I wrote a book, Familial Discourses in The Book of Margery Kempe. 'Blyssed be the wombe that the bar and the tetys that yaf the sowkyn,' which has won several prizes and is now listed as one of 15 reference works on Margery Kempe's life in Barry Windeatt's new Penguin edition. The then newly-discovered Chastising of God's Children manuscript, which was acquired by the Bodleian Library and had not even been foliated when I began working on it, was my starter project at Oxford. The first account uncovering the Latin source texts and strategic scribal alterations of the devotional texts in booklet I, including a manuscript tree, a transcription, and variants, came out recently. I was the first person from my country (Austria) to be permitted to pursue a doctorate, as well as the preceding MSt, in Medieval English at Oxford, and the first in my family to attend university.

Next to my studies, I was working as a Junior Research Fellow at the Ashmolean Museum and as a member of the 'Talking Sense' research group. Previously, I was a cataloguer for the Gothic Ivories Project at the Courtauld Institute of Art, where I was also the first Austrian to read for a postgraduate degree in medieval art history.

Teaching: I am a lecturer at Somerville College and have supervised undergraduate dissertations, lectured at the English Faculty and taught at Lady Margaret Hall, Hertford, and Wadham.

Research Interests: I specialise in late-medieval contemplative and devotional writing and texts of religious instruction in Middle English and Latin.  Another string in my bow is my background in medieval art history, and particularly in manuscript illumination (as well as Gothic ivories, treasury art, and paintings), which allows me to consider the relationships between the visual and the verbal. My personal interests revolve around opera and the human voice, the history and interpretation of silence, and playing the piano.

For a list of publications and prizes, see: https://oxford.academia.edu/RaphaelaRohrhofer