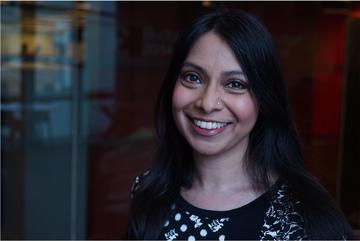 “In India, there is a beast called the manticore. It has a triple row of teeth, the face of a man, and grey eyes; it is blood-red in colour and has a lion’s body…”

What English literature student at Oxford wouldn’t fall in love with such a vivid description as that?

Astonishingly it’s 20 years since I matriculated at Mansfield College and was exposed to the wonder that is the MS Bodley 764 Bestiary. Neither myself or my tutor Lucinda Rumsey had any idea about what journey her copy of this wonderful guide to animals would lead to for me.

A state-school pupil, I applied to Mansfield due to its reputation for nurturing young journalists. That was always the dream – to tell the stories of other people and have an insight into their lives.

But dreams are never straight forward. They include strange diversions, metaphors and messages and often a lot of lessons and processing. Studying English at the best university in the world was certainly an achievement. It was never an easy process and I learned a lot beyond the tutorials and lectures, the constant essays and work hard, play hard ethos.

I absolutely loved the Bestiary and sitting in Lucinda’s room drinking constant cups of tea and eating malted milk biscuits (which we referred to as cow biscuits) was a sanctuary. I was able to look at children’s literature for my dissertation so that was an amazing opportunity.

Back then, there was also a module for our final assessments which a small number of us took up called E-literature. We had to learn to make a website from scratch. Stuart Lee was responsible for us then and the chance to play with language and an emerging digital sphere was something that I am still grateful for. Of course for that module, I created a website focused on the Bestiary – animals galore.

After a short stint travelling, I returned to my first love of journalism and worked in local newspapers. There I spent a few years working my way up the ladder and learning the importance of accountability and community. I then turned up at the BBC where I’ve been for the past 12 years. I’ve moved around the organisation working in most departments. I’ve worked for the website, Panorama, Newsbeat, World Service, newsgathering and elsewhere. I have worked on stories including natural disasters, terror attacks, tales about people doing good things to help their communities, and a whole lot more. I am often found to be writing though.  In fact last year I worked in Washington DC as the BBC News social specialist writer where I covered stories emerging on the social beat. As long as I could find an angle where the stories I worked on made people think differently, I’d achieved my goal.

Outside of work life, I have a lot of extra curriculars. It’s a habit I honed at Oxford and one I have continued with. I am an Ochberg Fellow with the Dart Centre for Trauma and Journalism and do a lot of work with the organisation to implement best practice when it comes to dealing with sensitive stories. A few years ago I was selected for a Rotary Peace Fellowship and moved to Thailand to study peace and conflict resolution. I am on the Board of The John Schofield Trust which helps young journalists to find mentors and I also do a lot of teaching and training.

But now, I’m embarking on a new adventure. While working in the Business Unit as a social strategy lead, I had a small idea. I’m used to dreaming big so when I couldn’t find a beginner’s guide to business that was fun and included animals; I decided to create one. I teamed up with another journalist called Dominic Bailey and for the past four years we’ve been working on our own bestiary.

We’ve tracked down animal metaphors used to explain market behaviour, money matters and the financial world. It’s our first book and it’s called Bear Markets and Beyond: A bestiary of business terms. We take readers on a safari meeting cash cows, bull markets, unicorns, gorillas and more. We’ve got fun, quirky illustrations and there’s a bit of etymology going on too. It’s amazing to think that twenty years from my first exposure to a bestiary, I’m now the author of one.