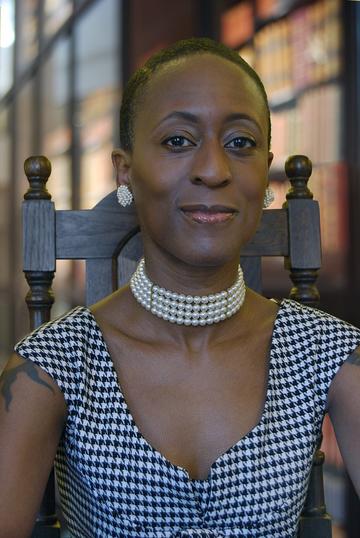 Geoffrey Chaucer’s Canterbury Tales made me the poet and novelist I am today. I attended Eirias High School in Colwyn Bay, North Wales. By A Level, I was already a poetry aficionado but simultaneously hearing, reading and mouthing the opening lines of the General Prologue expanded my world—the musicality and muscularity of Middle English with its pronounced final -e, the language both familiar and alien. Then we studied The Pardoner’s Tale.  The dizzying range of registers from the Latin refrain to the cursing, the astute characterisation and humour contrasting with the strong moral message, thrilled me. Poetry could do everything a novel could and more. It was three-dimensional—oral-aural-visual.

My excellent English teacher, Keith Toy, set us homework in creative translation. Write a character sketch in the prosody and tone of Chaucer. I received my only A in two years (he was a hard taskmaster!). That inspired me to write a series of character sketches based on mods, rockers and new romantics in the local area.

I arrived for my interview at Pembroke College armed with my ‘General Prologue to the Colwyn Bay Tales’. Three years’ later, I would take the ‘Chaucer and/or Langland’ option paper, enjoying the opportunity to study Chaucer’s complete works. In the first year, I relished learning Anglo-Saxon, enjoying the grittiness of the language, the robustness of kennings, the percussive punch of alliteration. I agonised whether to take Course 2 but in spite of my love of language, I was no linguist so opted instead to broaden my literary knowledge across the ages. Later, I appreciated the Lake Poets, particularly attracted to Wordsworth’s ‘language really spoken by men’ and Coleridge’s supernatural poems. But my fondest memory? Withdrawing audiocassettes from the English Faculty Library and noting the previous borrowing stamps were a decade earlier, in the 1970s! Surely a poem was made to both ‘herkne’ and ‘rede’?

On leaving Oxford, I attended Apples and Snakes performance poetry events in Covent Garden. It was a vibrant, young scene where poets delivered their work from memory. I found my tribe. I have always written in rhyme, the perfect mnemonic tool and I had the ability to effortlessly learn my own poems. I gradually managed to make a living as a ‘performance poet’. But I always took issue with the umbrella term which did not adequately describe the richness of the scene. There were punk poets, rap poets, dub poets, stand-up poets, surreal poets: half of us paid equal attention to the page and stage. My second collection, (Transformatrix, 2000), began with a freeform rap and ended with a sonnet, an attempt to bridge the gap between the literary and the performative. It included an early version of the Wife of Bath’s Prologue. Transformatrix led me to be nominated for the Next Generation Poets list in 2004.

In 2002 I obtained an MA in Creative Writing from the University of Sussex and subsequently lectured in Creative Writing at Cardiff, Greenwich and Kent Universities till 2004. I have been Fellow in Creative Writing at Oxford Brookes University since 2008. When I teach, I share my appreciation of traditional poetic forms like the sonnet and the sestina and my favourite, the specular, where the second half of the poem exactly mirrors the first half, in reverse order. The visual repetition is further enhanced by the aural echo. Chaucer’s influence persists just beneath the surface: herkne…and rede.

In 2012, as a poet who had lectured at the University of Kent, I was invited to be Canterbury Laureate. I applied for Arts Council funding and wrote Telling Tales, my 21st century retelling of all of Chaucer’s Canterbury Tales. I was particularly interested in translating his range of vernacular to contemporary, multicultural Britain whilst simultaneously celebrating his couplet and the Troilus stanza, rime royale. I also redressed the gender balance. The book was shortlisted for the Ted Hughes Award for New Work in Poetry 2014 and Wales Book of the Year 2015. I was subsequently invited to collaborate on a poem for the Refugee Tales project, giving voice to the voiceless and have been a supporter ever since.

Reworking Chaucer, inhabiting a range of registers in strict poetic forms, gave me the confidence to write a novel. I aimed to represent the voice of a 12-year-old autistic girl and her neurodiverse friends. My debut novel, The Infinite, began as a Creative Writing PhD proposal for an adult text, was submitted to my publisher as Young Adult and was published this April for 8 to 12 year olds. (I would argue it is suitable for 8 to ∞). I never did the PhD. Translating Chaucer necessitated some linguistic time travel: The Infinite has time-travel as a central motif. Its heroine, Elle, is obsessed with words, ‘the sound and shape of them and how they feel on my tongue.’ I suspect Chaucer would approve.