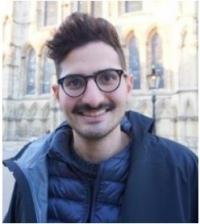 I started my DPhil in English literature in 2016. It's difficult to remember the first thread in the memorable cord that would eventually tie me to Oxford, but it was probably the year in school that we read Great Expectations. Thinking back through everything I've done from that point, I feel quite fortunate to be enrolled here, especially because for some time this state of affairs seemed truly fantastic.

In 2011, I graduated from Illinois State University with a BA in English and History and a minor in Latin. My undergraduate dissertation was on Kazuo Ishiguro and his usage of nineteenth-century literary tropes through the lens of Pierre Bourdieu's concept of habitus. In many ways, this project untied a number of threads that I would pull upon for the next five years: the relationship between education and artistic taste, the possibility of autonomous art, and the centrality of the Victorians to our notions of literature and literary history.

During the time between my BA and my MA, I worked as an Executive Assistant at the Chicago High School for the Arts, which had been founded as long-term fix for the relative lack of diversity in Chicago's arts organizations. Alongside a rigorous academic program, the school facilitated pre-professional fine arts training to students who would not normally be able follow such paths. For me, this meant daily negotiations between the top philanthropists in Chicago's art scene and residents of Chicago's most disadvantaged neighborhoods. This was an often stressful situation, but one that often redeemed itself in the image of both groups sitting side-by-side in the audience of the school plays.

Before coming to Oxford, I completed my MA in English Literature: 1850-present at King's College London. Because I was still interested in understanding the historical formation of literature, I enrolled in a class considering the relationship between nineteenth-century literature and science. Before taking in this class, I had no idea that it was possible to ask some of the questions that had always implicitly guided my work: on what disciplinary edges have we cut our modern understanding of the literary? To what degree can we generalize about the types of knowledge that literature does and doesn't provide? Is it possible to describe the distinctions between literary and non-literary genres in terms of form?

My thesis answers these questions in the specific milieu of late-nineteenth and early-twentieth century English and American literature. I look at the work of Henry James and the authors he patronized: Edith Wharton, Elizabeth Robins, and Henrik Ibsen. By paying particular attention to James and his brother, the eminent psychologist and philosopher William James, I intend to show that the relationship between literature and science at the time was not simply an esoteric debate, but one that had significant consequences for turn-of-the century thought.

While working on my thesis, I have also spent the last two years as President of the faculty's representative body, English Graduates at Oxford. During my tenure, I have attempted to ease conversation among different members of the faculty. Additionally, I have overseen a website re-haul, changes to examination regulations, and numerous spirited social outings. I hope that bringing together these different parts of the faculty has made a better environment for all of us involved.