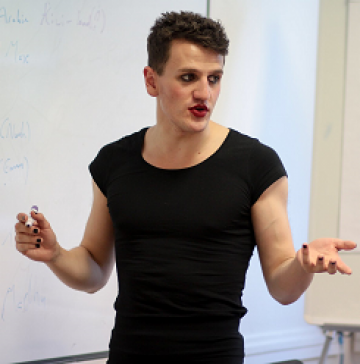 If, as many have alleged, a research project tells you more about its author than about its apparent object of scrutiny, then my DPhil thesis – ‘Irish Modernism and the Politics of Sexual Health’ – may seem to offer a rather worrying self-diagnosis.

Undeniably, the experience of growing up in Ireland in the 1990s amid a slew of revelations concerning the nation’s systemic culture of abuse, sexual violence, and silence, informed my desire to interrogate the ways in which the relationship between Irish identity and sexual conduct was constructed and instrumentalised during a key period in the country’s political and cultural self-fashioning. At the same time, an adolescent friendship with the son of one of the nation’s foremost sexual health specialists – and the often eye-watering after-dinner conversations this entailed – left me sceptical of literary and cultural criticism which presented the Irish as uniquely or even exceptionally repressed. As a result, in my research I seek to do justice to the very real suffering, injustice, and violence that have resulted from spurious narratives of Irish sexual purity, while at the same time situating those narratives in a wider European context of anxieties around fertility, venereal disease, and degeneration.

Throughout my academic life, I have been lucky to have Oxford as the consistently stimulating, sometimes challenging, and always nurturing environment in which to explore and develop these ideas. Jeri Johnson’s undergraduate lectures on Joyce – in which reminiscences about Richard Ellmann’s personal reflections on Bloom’s foreskin mingled with fascinating elucidations of seemingly throwaway details in the Joycean oeuvre – and Sos Eltis’s on Wilde – in which the author seemed to be conjured into the room, séance-like, through sheer enthusiasm – still inform how I write and think. As convenor of the English Faculty’s Modern and Contemporary Literature Research Seminar, it has been a pleasure to be able to contribute to this rich and vibrant research culture, bringing dynamic contemporary voices in critical and creative practice such as Emilie Morin (University of York) and Alys Conran (Bangor University) to Oxford.

The abundance of teaching and mentoring opportunities Oxford affords have proven invaluable in developing my capacities as an academic and educator. Since its launch in 2016, I have been fortunate enough to serve as one of the English tutors on Lady Margaret Hall’s Foundation Year programme – an outreach scheme intended to offer study skills, critical thinking training, and subject-specific tuition to cohorts of students from educational and socio-economic backgrounds traditionally under-represented in Oxford and academia at large. The opportunity to help extend access to higher education, watch incredibly talented young people find their critical voices, and give something back to the college that first welcomed me to Oxford has been rewarding beyond measure.

At a personal level, as a trans* person who came out in the course of their DPhil – regrettable comments by the Vice Chancellor notwithstanding – I have found Oxford to be an open and supportive environment in which to live and love authentically. Former tutors and current colleagues have been unstinting in their generosity, compassion, and encouragement, and my work as an LGBTQ+ Staff Role Model and a Post-Graduate Representative on the English Faculty’s Athena Swan Self-Assessment Team have provided many heartening opportunities to celebrate and sponsor the valuable work to foster inclusion and equality that goes on throughout Oxford.

Last April, I was able to unite these personal and professional strands in the English Faculty by hosting Queer Modernism(s) II: Intersectional Identities, a two-day conference exploring the intersections of sexuality, gender, race, and disability in modernist texts from across the globe. With the support of the English Faculty, TORCH, and the Andrew W Mellon Foundation, my co-organisers, Séan Richardson (Nottingham Trent University) and Rio Matchett (University Liverpool), and I welcomed scholars from the United States, Canada, Turkey, China, and across Europe to discuss the ways in which queer theory can enrich our understanding of modernist culture, and explore the ways in which modernism may offer us new ways to think queerly. Rigorous, playful, and inclusive, the event encapsulated everything I have come to love about living and working in Oxford.