We are delighted that Professor Helen Small has been appointed to the Merton Professorship of English Language and Literature, and will take up the post from 1 October 2018. Professor Small has been a member of the English Faculty at Oxford since 1998, and is currently Jonathan and Julia Aisbitt Fellow in English Literature and Professor of English Literature at Pembroke College. She will take up her new post on 1 October 2018. Professor Small is passionate about advocating for the Humanities, and has previously published a study of the defences for the humanities which have been most influential in the nineteenth and twentieth centuries, and which still hold sway today. She is currently working on a study of modern cynicism, looking at its function within literature and critical philosophy.

During the course of the coming year, the English Faculty (alongside History and Music) plans to put in an application for an Athena SWAN bronze award. Athena SWAN is a scheme run by the Equality Challenge Unit (an independent (non-Oxford) body) which is designed to consider questions of gender equality in higher education settings. Athena SWAN (which stands for the Scientific Women's Action Network) began as an initiative to address the under representation of women in the sciences. While the acronym sticks, the idea of ‘science’ is no longer a vital part of Athena SWAN. The initiative has been extended to the humanities, and is used as a way in which all departments can reflect on the way in which they support and promote gender equality.

In order to qualify for an award, our Faculty’s Self-Assessment Team will gather quantitative and qualitative evidence about gender equality – looking at everything ranging from undergraduate and graduate performance to questions of career progression and equality in our working environment. We’ll then make an action plan in response to our discoveries. We’ve taken this as a great opportunity to bring different members of our Faculty – staff, students, College Lecturers, postdocs and academic postholders – together to reflect on what our Faculty does well, and what it could do better. So far, our meetings have been thought-provoking, convivial and inspiring – and we aim to use our engagement with Athena SWAN to leave a positive and lasting legacy in relation to our Faculty’s approach to equality. 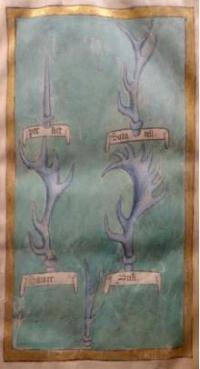 Professor Daniel Wakelin, the Jeremy Griffiths Professor of Medieval English Palaeography in the Faculty of English, curated the exhibition Designing English: Graphics on the Medieval Page at the Weston Library, part of the Bodleian Library in Oxford. The exhibition illustrated the graphic design of handwritten manuscripts and inscriptions for the first thousand years of English, across the Middle Ages, and showcased the Bodleian Library’s rich holdings of medieval manuscripts in English, along with inscriptions on artefacts loaned from the Ashmolean Museum and British Museum.

The exhibition emerged from Professor Wakelin’s teaching for both graduate and undergraduate courses, in which he introduces students to the making and design of the manuscripts in which most medieval literature survives. Several students from the MSt course and DPhil programme worked as tour guides for short ‘taster’ tours in the exhibition gallery, especially with school groups and at the Bodleian’s ‘Library Late’ evening events.

Just as Professor Wakelin seeks to introduce students to the full range of books in English, the exhibition likewise showed the full range of such books. It ranged from Old English picture books or notes scratched into herbals, through fragments of medieval songs scribbled on spare pages, to masterpieces framed with illustrations and gold, or new page designs for practical tasks, such as manuals for handling swans. It covered books and other objects with writing on, from grisly tombs to graffiti. It revealed the experiences of both the makers and the users of writing: how craftspeople planned and made books, and how readers responded to their designs. It uncovered the craft of the scribes, painters and engravers, to preserve, clarify, adorn, authorize and interpret writing in English. It covered not only the gorgeous treasures of the finest artists, as often seen in exhibitions of medieval manuscripts, but also the ingenuity of ordinary people writing for practical tasks. It showed how everyday writings – practical and scientific as well as literary – could involve imagination and skill in design. English could be belittled and squeezed in alongside the other languages more common in medieval books, and which influenced the design of English. As English was more rarely written, often outside powerful institutions which wrote in Latin, scribes and artists sometimes had to experiment in that language. Whether in such fugitive places or presented with pride, the craft and inventiveness of scribes, painters and engravers have resonance today, when digital media lets many people experiment in amateur design – word processing, social media, customized products.

To show the likeness to modern craft, a parallel exhibition ran until March 11, Redesigning the Medieval Book: a display of contemporary book arts inspired by the exhibition, and created through a workshop and competition. With support from the University’s Public Engagement in Research Seed Fund, we invited contemporary artists to a preview of much of the exhibition several months in advance. Fifty-six artists then submitted a new piece of book art in response to the medieval manuscripts. We awarded four prizes and displayed twenty-four of the new artworks in the Bodleian Library. Many of the competition entries will then be displayed at the University of the West of England later in 2018.

Together the twin exhibitions showed the creativity of medieval artisans in recording English and suggested ways in which that creativity might continue to inspire artists today.

Daniel Wakelin teaches on the MSt course in English literature 650-1550 and for Course II of the English FHS course.