When and where was Jane Eyre written? And in what language?

The answers may seem obvious. But, in fact, Charlotte Brontë’s novel has been written at least 631 times, in at least 59 languages, in places ranging from Addis Ababa to Zurich, Aleppo to Wuhan. By 1850 (three years after the book’s first publication in English), a version was being serialised in Havana, Cuba; and translations had already appeared in Germany (three different versions)  and Russia (again three), as well as the Netherlands, Belgium, and Denmark.  The book was first translated into Japanese in 1896, and Armenian in 1908. Since 1980, there have been 37 different translations into Persian, and – wait for it – 116 into Chinese.

What happens if we think of Jane Eyre not just as an English book, but as being made up of this enormous, multilingual, trans-temporal and transcultural cloud of textuality? And how can we even begin to study it? 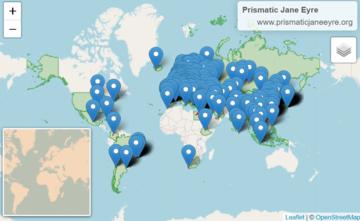 To take the second question first: we can study it through collaboration, and with the help of new digital humanities techniques. My Prismatic Jane Eyre project, which is hosted by the Oxford Comparative Criticism and Translation research centre (OCCT), and was funded by the Arts and Humanities Research Council from 2016-20, relies on the participation of 32 other scholars, with a wide range of language competencies. Together, we look closely at aspects of the novel as they are remade in different tongues: recurrent key words like ‘passion’, ‘walk’ and ‘plain’; pronouns; addresses to the reader, like the famous ‘Reader, I married him’, and iconic passages, such as ‘the red-room’.

We trace how the text has interacted with different contexts – the  particular feminist charge of its serialisation in a vegetarian magazine, Zoophilo, in Lisbon in 1877 (researched by Ana Teresa Marques dos Santos and Claudia Pazos Alonso); its impact on Japanese manga and anime since the 1960s (Yorimitsu Hashimoto); or the significance of the fact that it has never been translated into Swahili (Annmarie Drury).

Interactive digital maps, created by Giovanni Pietro Vitali, help us to keep track of the novel’s diffusion through space and time, and to understand it as an intersectional global phenomenon. In the – as yet fairly few –  languages for which we have been able to source or create reliable electronic texts, digital stylistic analysis can also help us see what is going on in the translations, though, at the moment, it is still hard for computers to look comparatively across languages: this is ground-breaking, early work.

So what happens to Jane Eyre as a result of all this research? It is revealed as a text which is written, not just in English, but in language – which is to say, it is endlessly being re-imagined and re-expressed, in different places and moments, by different people, with ever-varying linguistic materials. Translation is not a matter of trying (and necessarily failing) to be ‘the same’ as the source text, but rather of remaking it for different purposes with different means. For instance, the reason why there are so many translations in Iran in the 1980s is that, after the revolution there (as Kayvan Tahmasebian and Rebecca Gould have found), Jane Eyre became a vessel for romance modes of writing and reading which were otherwise banned.

Looked at from our global, multilingual perspective, the novel becomes a store of signifying potential which is realised differently in different tongues. Think, for example, of languages which make a systematic distinction between formal and informal ‘you’ (vous/tu; Sie/ du; Lei/tu, etc). For them, there is, or can be, a deeply significant moment in the novel which cannot be made visible in English in the same way: do Jane and Rochester ever call each other ‘tu’? As Mary Frank has discovered, there are several places where the moment could be (and where translators have brought it into being.) This is just one instance of how English literature is not only in English, and of how studying it involves the interplay of many tongues.

The interactive maps, and much of our work in progress, can be found at https://prismaticjaneeyre.org/; the book of the project, which will be integrated with the website, should be published in open-access format by about the end of 2021. A list of participants is at https://prismaticjaneeyre.org/people/. Prismatic Jane Eyre was funded by the AHRC 2016-20 as part of the Open World Research Initiative research programme in Creative Multilingualism: https://www.creativeml.ox.ac.uk/.