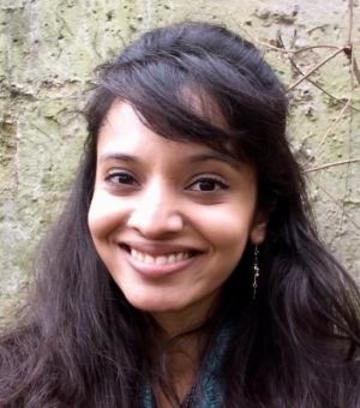 That’s difficult—I know what I’ve enjoyed, but less sure what’s really made an impact. These are the books I wouldn’t be able to live without: Pride and Prejudice, Zadie Smith’s two collections of essays ( Changing My Mind and Feel Free), the poems of Elizabeth Bishop, Bleak House (preferably my own copy—not for the slightly naïve annotations, but the ticket-stubs and postcards that fall out whenever I pick it up). When I was very small, it wasn’t a book that had the most impact, but one of my dad’s stories. He’d tell it in the evenings with minor variations, as we sat squashed in an armchair. It was an early, virtuoso display of what it meant to be a cultural magpie: a Rajput prince and Brontosaurus travelled downriver on the Famous Five’s wooden raft and happily coexisted with Merlin (who melted during the denouement, like the Wicked Witch of the West). We also had a massive volume of Dr Seuss—I think that’s one of the reasons I have such a soft spot for silliness, though I know he is also very serious. When I was a little older, I often re-read Charlotte’s Web and The Trumpet of the Swan by EB White, as well as EL Konigsburg’s From the Mixed-Up Files of Mrs Basil E. Frankweiler; I suppose they’re all about creativity and finding one’s language, in one way or another. There’s Philip Pullman’s His Dark Materials trilogy, of course. I remember reading the first chapter of Northern Lights aloud in the Pink Group at my primary school, and that must’ve been when I learnt about a place called Oxford. I probably applied to Oxford because of Lyra, and so she’s had a tangible impact on the way things have gone.

Lately I’ve realised I spend a lot of time just staring into space and daydreaming, which is disconcerting.

I’d have submitted something that’s taken a lot of effort—I love that very specific post-deadline catharsis and sense of freedom. Reading in bed with a strong cup of coffee and a not-quite-respectable breakfast—cake? Weather would be important—somewhere between twenty and twenty-five degrees, sunny with a breeze. Many hours wandering around a city—I don’t mind which one. A dim sum lunch with my parents; a hug from my grandma and a chance to hear her singing; leisurely conversation and laughter with a small group of old friends. (I’m noticing that I would need access to a teleportation device to make all of this work.) A trip to the movies in the evening. A large, very low moon.

In a city by the sea, in oddly-shaped rooms with lots of windows. But now I’ll over-think this, because my academic work is about literature and place! I was born just outside Los Angeles to parents from Kolkata, grew up in Hong Kong, and have spent the latest stretch of time in Oxford; if you’ve been visa-to-visa for a while, you tend to feel your relationship to place is less about choice than about accidents, and being prepared for change. I find everywhere interesting, and could be at home anywhere I ended up.

As a child, what did you want to be when you grew up?

There were phases when I thought I might be an archaeologist, or someone who studied whales. In hindsight, neither would have suited me. I mainly wanted to write novels. We had a shelf full of scrap paper, which I easily could reach. I’d sit on the floor and fill pages and pages with stories and illustrations, with three staples down the side to make a book. I would also attempt to sell my ‘art’ to my parents.

If I’m entirely honest, the Teenage Mutant Ninja Turtles. (We got a strange mix of TV feeds. Along with the local soaps and dramas, we had the 1995 Pride and Prejudice and The Animals of Farthing Wood from the UK—I mourned the death of some cartoon hedgehogs about two decades before I actually saw a real one—and Jem and the Holograms from the States, which is now very retro.)

My fantastic A Level English teachers, Mr Turver and Mr Wheeler, who gave us a sense of what university classes might be like. We read Margaret Atwood’s Alias Grace with Mr Wheeler, and that led to so many conversations about gender, class, and settler colonialism. It’s very exciting to teach the same novel in my own tutorials now. Mr Turver introduced us to literary theory, and I found myself suddenly thinking in different ways. He also lent me a copy of Vishal Bhardwaj’s Omkara when we were studying Othello, which was fascinating for all kinds of reasons.

Do you have pets?

Not at the moment—but after many years living with comical and splashily affectionate golden retrievers, and a recent dream in which I adopted a greyhound, I hope that’ll change.

No! I was too shy (and well-behaved) to be popular!

Anything by Joni Mitchell. I’m not very original or discerning when it comes to music, and rely on other people to recommend things to me. When I’m writing and need a boost, I listen to Queen or Lady Gaga.

I’m not bothered about meeting Byron, but would love to bring his dog, Boatswain, back to life. He could lie under the table and slobber on everyone’s feet. I think I’m most curious about people who weren’t famous, and to hear what they might tell me—so, five people, chosen at random, from across the span of Hong Kong’s history.

How would your friends describe you?

‘Pixellated’ (given how much of our human contact is taking place over the Internet at the moment).

My mentors and colleagues, going to the Bod, and working with my wonderful students—which can be like magic. It’s a very great privilege to have this job. What I least enjoy—well, that point in the research process when you feel as if you’re the stupidest person alive.

Why do you think we’re here? (Throwing the question back has surely got to be sound pedagogical practice… hasn’t it…?)

The sobering answer is that I’d most likely be unemployed. I can imagine an alternate reality in which I end up as a real estate agent, get swept up in the sheer romance of matching homes to people, but have no talent for securing an actual transaction.

Ushashi is the Jonathan and Julia Aisbitt Fellow in English at Pembroke College, where she teaches literature from 1760 to the present day. Her first book, Charles Dickens and the Properties of Fiction: The Lodger World, was published in May this year.