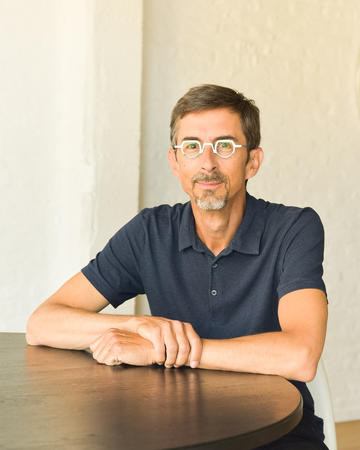 Joyce’s Finnegans Wake. The sheer energy emanating from that book is phenomenal. It is the first book that suggested to me the possibility of literary enactment; the possibility of showing rather than telling, of letting the language be ‘in twosome twiminds’ rather than using it to tell in so many words that someone is in doubt. Or as Beckett put it, Joyce’s writing ‘is not about something; it is that something itself.’ It is also through Joyce’s notes that I discovered Beckett. Beckett read a few books for Joyce towards the end of the writing process of Finnegans Wake, notably a German book on linguistic scepticism. Eventually it had a much bigger impact on Beckett’s work than on Joyce’s.

If I can’t kayak or play badminton, I like to go hiking, for instance in the Ardennes.

My ideal day would be a sunny Bloomsday. Wake up with the sound of birds. Get up early. Put on some piano music by Satie. Make a cup of coffee for the love of my life. Have breakfast outside in the early sun. Talk without any sense of time. Have only one project to focus on, say, the transcription of a manuscript by Samuel Beckett. Be absorbed in this work for a few hours. Make a sandwich. Go for a long walk. The destination is a beautiful lake. No wind. The water surface is a perfect mirror. Go for a swim. Return. Expect a few good friends. Prepare a barbecue to celebrate Bloomsday. Have a beer together. Talk until the sun sets, and long after.

In Paris. I like the anonymity of the big modernist city. And baguettes.

As a child, what did you want to be when you grew up?

Bert and Ernie from Sesame Street.

The last of the Jesuits at my school. He encouraged us to help younger kids with their homework. When we tried to use this as an excuse to ask for an extension of the deadline for our own homework, he categorically refused.

Do you have pets?

No. My children once asked to have a goldfish. When it died, we had to bury it. We did not have a garden, so we buried it among the flowers on the balcony. That was the end of the short pet episode.

I would prefer to have dinner with each of them separately. First with Samuel Beckett, in one of his favourite places in Paris, the Closerie des Lilas for instance. It would probably be a silent meal, and it wouldn’t be after a glass of Jameson that we would start talking – but from that moment on non-stop until the early morning. Then with Mary Shelley to talk about how she wrote Frankenstein. Then with the Marquis de Sade and Simone de Beauvoir, to find out about the dark side of Enlightenment. And finally with Leonardo da Vinci, in his atelier, among his notebooks.

‘Something is taking its course.’

Most: the opportunity to work with manuscripts and trace the way my favourite authors have created their characters. Least: the administration that only seems to grow with automatization.

They say it has to do with our parents’ having had sexual intercourse. Anyway, ‘You are on earth, there’s no cure for that.’

Screenwriter; or more probably: member of the Modern Languages faculty.

Dirk Van Hulle is Professor of Bibliography and Modern Book History at the University of Oxford, chair of the Oxford Centre for Textual Editing and Theory (OCTET) and director of the Centre for Manuscript Genetics at the University of Antwerp. With Mark Nixon, he is co-director of the Beckett Digital Manuscript Project (www.beckettarchive.org), series editor of the Cambridge UP series ‘Elements in Beckett Studies’ and editor of the Journal of Beckett Studies. His publications include Textual Awareness (2004), Modern Manuscripts (2014), Samuel Beckett’s Library (2013, with Mark Nixon), The New Cambridge Companion to Samuel Beckett (2015), James Joyce’s Work in Progress (2016), the Beckett Digital Library, a number of volumes in the ‘Making of’ series (Bloomsbury) and genetic editions in the Beckett Digital Manuscript Project, which won the 2019 Prize for a Bibliography, Archive or Digital Project of the Modern Language Association (MLA).