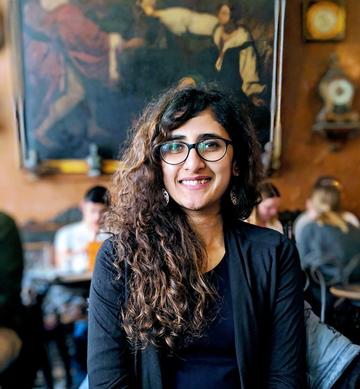 I joined the Faculty of English as a DPhil candidate in 2016. My doctoral dissertation examines the under-scrutinised corpus of Indian writings in English which depicts the Emergency in India (declared by Prime Minister Indira Gandhi in 1975). A tumultuous period in postcolonial Indian history, the period has been well-documented in memoirs, biographies and political non-fiction. However, genres like novels and political cartoons, too, have represented the intricacies of life during the Emergency, but received little scholarly attention. In my dissertation, I bring together an inter-genre ensemble of works on the Emergency, including novels, political cartoons, long graphic narratives, and theatre.

Before starting my DPhil, I completed an MA and an MPhil at the Centre for English studies at Jawaharlal Nehru University (JNU) in New Delhi. The keen attention paid to the thriving crop of Anglophone writing from India in many of the courses I took during my stay at JNU, and the vibrant political culture in the university, fortuitously joined forces in stirring my interest in a subject which lies at the intersection of history, politics and literature. Though I had earlier received a BA in Psychology, English and Journalism from Mount Carmel College, Bangalore, and initially thought I would want to pursue a career in print journalism, I found the few small stints I did at news-desks over many summers rather uninspiring. In contrast, I found myself gripped by the imaginative hold of the worlds inaugurated within literary texts. As my MA degree was not tied to a specific period in English literary history, I was able to research a variety of subjects, including flanerie in the poetry of Bombay modernists in the 1960s, cyborg hypermasculinity and posthumanism in twentieth century science fiction, translation studies, and gender and sexuality in world cinema. In my MPhil dissertation, I brought together my long-standing interest in urban writings from the global south, my love for the city of Delhi, and a burgeoning curiosity in the philosophy of temporality to produce a dissertation on how the politics of time plays out within representations of Delhi in Indian writings in English.

Though I dedicated the bulk of my time at Oxford to writing my dissertation, as someone who had taught very little before arriving here, the Faculty’s many teaching programmes proved invaluable in helping me rest my worries regarding my pedagogical acumen even as I constantly wondered if a career in research and teaching was really for me. As a graduate teaching assistant and tutor to visiting students, I designed and taught courses on postcolonial and world literature, South Asian writings, statelessness and literature, and modernist writings, among others. I have also benefitted from the wide-ranging roster of exchange programmes at Oxford: in June 2019, I was given a generous grant by Merton College to attend the School of Criticism and Theory at Cornell University, where I spent an intense and intellectually-rich summer.

A profile of my academic life at Oxford would be incomplete without mentioning the Postcolonial Writing and Theory seminar at the Faculty of English. Convened by Prof. Ankhi Mukherjee and Prof. Elleke Boehmer, the seminar enabled me to work closely with numerous like-minded scholars who share my passion for fostering an inclusive academic culture in higher education. In keeping with the same goals, I also worked as the MCR BAME officer at Merton College between April 2019-March 2020. Amidst fine-tuning my scholarly interests in postcolonial and world literatures in my academic work in the future, I hope to continue working on improving access for diverse and under-represented students within academic spaces.

Bhagya Casaba Somashekar is a fourth-year DPhil candidate in English. Her near-complete doctoral dissertation is titled “Tropes of Exception: Representations of the Emergency in Indian Writings in English.” Her academic writing has appeared in the Journal of Postcolonial Writing, Oxford Research in English, and Queen’s Political Review. She was awarded the PSA/ JPW postgraduate essay prize in 2019.