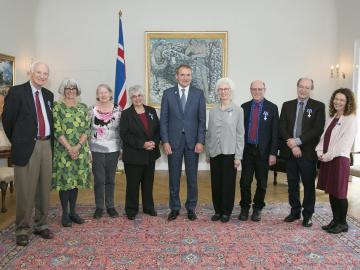 Carolyne Larrington, Professor of Medieval European Literature at the English Faculty, has been awarded the Order of the Falcon for services to Icelandic literature by the President of Iceland, Guðni Th. Jóhannesson.

The Order of the Falcon honours both Icelanders and citizens of other countries for achievements in Iceland or internationally. Professor Larrington, who was sworn into the Order alongside seven other distinguished scholars, was 'surprised and delighted' to receive the award.

Professor Larrington's research interests encompass Old Icelandic literature, medieval women's writing, European Arthurian literature, and emotion in medieval literature, particularly in European secular literature and in Old Norse. Her translation of the key collection of medieval mythological and heroic poems known as the Poetic Edda is the standard, used by scholars around the world.

Find out more about Professor Larrington's work here. Our heartfelt congratulations on this well-deserved honour!