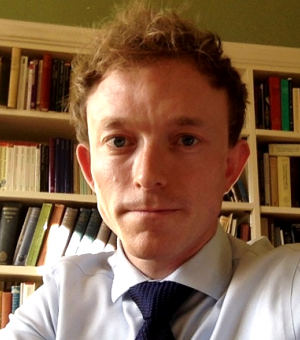 My research focuses on Shakespeare, book history, and early modern literary culture. In particular, I am interested in the scrappy, ragged, 'forgotten middlemen of literature', as Robert Darnton has called the denizens of the world of early print, and the influence these individuals had on the intellectual and literary world of the English Renaissance. At the moment, I am researching the figure of the early modern publisher as someone who provided structure and authority to what Robert Burton called a 'vast Chaos and confusion of books'. My other research interests include the history of libraries and of book organisation; the early reception of Shakespeare's writings; the Shakespearean apocrypha; and the writings of Sir Thomas Browne.

I am currently working on two main projects. My first monograph, Publishing Shakespeare: The First Folio and the Early Modern Book Trade, tells a new and timely story about the First Folio, arguing that its reception was shaped by its publishers. Through a close reading of the concept of ‘credit’, and the ways in which this invisible lustre was constituted and trafficked within the book trade, the monograph revises current histories of both early modern print and Shakespeare’s reception. The manuscript for this book is due in August 2019.

Alongside this, I am editing a  second book, entitled To My Bookseller: Author-Stationer Correspondence in the Early Modern Period, which presents a corpus of previously unknown manuscript correspondence between writers and stationers, dated between 1570-1650. These letters, gathered from archives across the world, cover a fascinating range of topics from within the world of book production, such as the control of the layout of title pages, contract negotiations, and methods of advertising. The introdution to this work explores how ideas of agency behind bookmaking have governed some of the most compelling narratives about early modern print, such as the 1619 collection of 'Pavier Quartos', or Shakespeare's arrival in print courtesy of his townsman Richard Field.

My most recent article, forthcoming in The Library (2019) reveals a new early seventeenth century owner of a Shakespeare Folio, recorded in his manuscript library list. The article discusses how this Folio sits within the intellectual and literary context of the owner's library, and what this might reveal about how Shakespeare was being read.

I am also a volume editor for the Stationers' Register Online project, led by Giles Bergel and Ian Gadd, and now available to use at this link. I am volume editor for 'Register D' of the Stationers' Company archives, which contains the entrance of manuscripts and reassigned printed copies between 1620 and 1641. The project will provide scholars of the early modern period with an invaluable update to Edward Arber's nineteenth century transcription of the Stationers' Register, and foster new modes of scholarship at the confluence of book history and literary criticism.

At undergraduate level I teach both Final Honours students and Prelims. For the Final Honours School, I teach any literature produced between 1550 and 1760, which means:

For Prelims I teach Paper 1b (Approaches to Literature).

For postgraduate level, in 2018-19 I co-convene the compulsory M.St 'A Course' with Professor Lorna Hutson and Dr Katie Murphy, and I co-teach the 'B Course' in Early Modern Textual Cultures with Professor Adam Smyth. This Hilary, Professor Smyth delivers the classes, and I provide tutorials for students to support their research project assessments. I am also involved in graduate admissions for the M.St.

I lecture on Shakespeare's Apocrypha, a series which introduces students to the shady penumbra of texts that have variously been attributed to or deattributed from the Shakespeare canon, and on the eighteenth century editorial tradition.

I also supervise dissertations at both undergraduate and M.St level, and am open to any students interested in the research areas discussed above. For the 2018-19 academic year I am a member of the Final Honours School examination board, and co-set the examination paper for the Renaissance (Paper 3) with Professor Emma Smith.