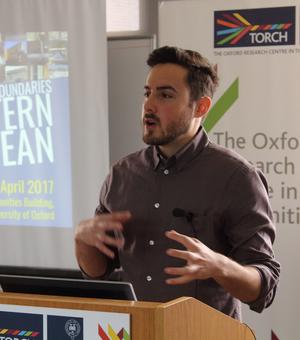 Daniele Nunziata is a Lecturer in English at St Anne's College, University of Oxford. He currently delivers lectures, seminars and tutorials on nineteenth, twentieth, and twenty-first century literature. Teaching includes the Prelim papers 'Literature in English, 1830 – 1910' ('Victorian') and 'Literature in English, 1910 – Present Day' ('Modern'), as well as 'An Introduction to Postcolonial Literature and Theory'. He also supervises dissertations regarding postcolonial subjects. His primary research concerns literature from the Eastern Mediterranean (the Middle East) with a focus on Cypriot travel writing before and after its independence from the British Empire. Central to this is the need to address the island's historical and contemporaneous relationship with imperialism, nationalism, and partition, asking questions about the language and literary form used by postcolonial Cypriot writers. His publications and conference papers concern this context and other aspects of postcolonial, comparative, and world literature studies. This ranges from nineteenth-century Orientalist women's writing on Cyprus and its implications for the concept of auto-exoticism; to mid-twentieth-century translations and transcriptions of oral narratives across the African continent by the OUP and how it complicates our ideas about the British publishing industry's relationship with orature and cultural capital.

'Cypriot Literatures and the World: Language, Nationalism, and the Bildungsroman, 1960-1974' in World Literature in Motion: Institution, Recognition, Location (Ibidem and Columbia University Press, 2020)

The Scramble for African Orature: The Transcription, Compilation, and Marketing of African Oral Narratives in the Oxford Library of African Literature, 1964 to 1979

“The First English Lady Seen in These Parts”: Autoexoticizing Race and Gender in Colonial Women’s Writing on Cyprus