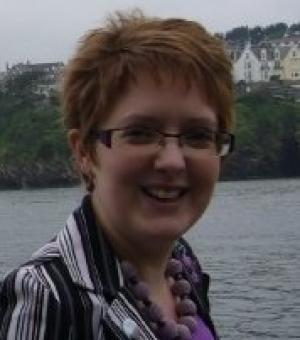 I have supervised undergraduate dissertations on hostile space in Old English literature; women in domestic space in Middle English literature; queer Chaucer; the women mystics of Oxford, Bodleian Library, MS Douce 114; the gothic in the works of Daphne du Maurier; Angela Carter's medievalism; and the 'Chocolat' novels of Joanne Harris. I have supervised MSt dissertations on medieval carols, Christ's body and affective piety, on the Virgin Mary in the N-Town plays and The Book of Margery Kempe, and on gender and place in the works of Daphne du Maurier.

Dr Laura Varnam did her BA at Durham, her MA at Leeds, and her DPhil at Lady Margaret Hall, Oxford. She is the Lecturer in Old and Middle English at University College, Oxford. Laura's first book, The Church as Sacred Space in Middle English Literature and Culture, was published by Manchester University Press in 2018.

Laura is currently working on a poetry collection inspired by the women of Beowulf. Links to published poems from the collection can be found here. She has a group of poems plus a creative-critical article about the collection forthcoming in the journal postmedieval in 2023.

Laura is also an expert on the life and works of Daphne du Maurier. She is currently writing a book on du Maurier and regularly appears at the Fowey Festival of Arts and Literature (formerly the Du Maurier Festival), giving lectures and running reading group discussions on du Maurier. Laura was interviewed for the 2017 Arte documentary Daphne du Maurier: Sur les traces de Rebecca ('In the footsteps of Rebecca') and she was involved in the launch events for Tatiana de Rosnay's biography of Daphne du Maurier, Manderley Forever (published in the UK in 2017). Laura published an article in The Independent on the 80th anniversary of the publication of Rebecca in 2018 and in 2019 she published the first academic article on du Maurier's biography of Branwell Bronte (in the journal Bronte Studies). She was the expert guest on the award-winning literary podcast Backlisted, discussing du Maurier's short story collection The Breaking Point, and her expert interview essays on du Maurier are featured on the Five Books website (on Rebecca and on Du Maurier's other works).

In October 2020 Laura returned as an expert guest on Backlisted to discuss Beowulf and in October 2021 to discuss the fiction of Elizabeth Jane Howard.