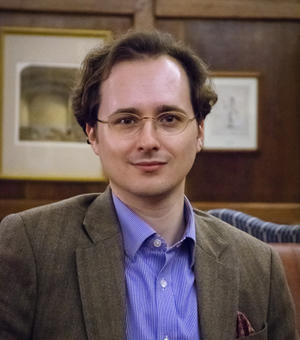 Michael J. Sullivan is a Research Fellow at Christ Church, Oxford, and General Editor of The Complete Works of Alfred Tennyson for Oxford University Press. His interests span the poetics and verse cultures of the eighteenth and long nineteenth centuries, with publications on Victorian and Romantic literature and a special interest in the works of Tennyson, Byron, Wordsworth, and Dickinson. He is a past holder of the Rodney G. Dennis Visiting Fellowship in the Study of Manuscripts at the Houghton Library, Harvard, and his work on Tennyson’s revisions won the 2016 Gordon Duff Prize in the Arts of Manuscripts.

I completed my PhD at Trinity College, Cambridge, after studying for the MPhil in Eighteenth-Century and Romantic Studies, both funded by the Arts and Humanities Research Council. Prior to my postgraduate research, I graduated from the University of Durham, where I was a Vice-Chancellor’s Scholar and winner of the T. W. Craik, Brooks Johnson, and J. R. Watson prizes, for the highest performance in the Shakespeare and overall Finals Examinations. I was educated at state schools in Yorkshire, and contribute to access, outreach, and public engagement for literature and the humanities.

Among my current projects is the first book-length study of Tennyson’s manuscript revisions, and their role in the development of his style. Its chapters examine how Tennyson’s notebooks record a series of profound shifts in the style of English verse and versification, stretching from the Romantics to the end of the nineteenth century. Uncovering new manuscripts from Cambridge, Lincoln, and Harvard, the monograph traces how literary modes – from the lyric to the epic – were altered on the page, as new movements modified the conventions of the eighteenth and early nineteenth centuries. Extensive archival research for this study was supported by a Rodney G. Dennis Visiting Fellowship in the Study of Manuscripts at the Houghton Library, Harvard, which gave me the resources to consult over 70 notebooks and 300 folders of Tennyson’s drafts and correspondence. Chapters arising from this research have been published in Essays in Criticism and Literary Imagination, and the resulting articles examine Tennyson’s selection of poems for The Golden Treasury (1861), the most influential lyric anthology of the nineteenth century. By considering the anthology’s fair copy alongside a rediscovered revision copy, the articles shed new light on Tennyson’s poetic influences, and on his aesthetic control over the formation of a Victorian literary canon.

I am General Editor of The Complete Works of Alfred Tennyson for Oxford University Press, and have guest edited Special Issues of the Tennyson Research Bulletin (2020) and Victorian Poetry (2021). Since 2017, I have been an Executive Member of the Tennyson Society, and in 2019 I organised an international conference in Tennyson Studies at Christ Church, Oxford.

I hold additional research interests in the development of genre in the nineteenth century, and in Byron, Shelley, the Brontës, the Brownings, Arnold, Wordsworth, and Keats. My thematic research interests include the development of the verse novel, print and manuscript cultures since 1700, lyric studies and the musicality of verse, the role of lyric anthologies in canon creation and periodisation, the origins and legacies of ‘Romanticism’, the influence of sceptical philosophy and aesthetics on English verse, Anglo-American intersections, editing and textual criticism, and temporality in narrative verse.

Dissertations supervised include work on Elizabeth Siddal and Dante Gabriel Rossetti, the manuscripts of Emily Dickinson, Hopkins’s religious orders, Keats and absence, and Tennyson and mourning.

Poetry and prose from the eighteenth century to the present day. At Christ Church, I teach Prelims Papers 3 and 4 (Literature in English since 1830), as well as workshops on close reading manuscripts. In Cambridge, I supervised at Trinity, St John’s, Selwyn, Magdalene, Pembroke, and Emmanuel, for the third-year Lyric and Victorian papers, first- and third-year Practical Criticism, and second-year dissertations.

For the M.St. in English 1830-1914, I have taught sessions on ‘Revision in Victorian Verse’, and am interested in supervising Master’s dissertations in any of my areas of research.

2. Tennyson and the Revision of Song (in preparation)

Reviews and Other Publications

‘Silence and Sublimity in Tennyson’s Early Notebooks’, Inventions of the Text, University of Durham (May 2019 – invited, one-hour seminar paper)

‘Elegy in Exile: Byron and the Poetic Experiments of 1816’, The Summer of 1816: A Bicentenary Conference, University of Sheffield (June 2016)

‘“Notes of busy life in distant worlds”: Tennyson and the Voice of Antiquity’, Victorian Modernities Conference, University of Kent (June 2015)

‘“The Controlless Core of Human Hearts”: Writing the Self in Byron’s Don Juan’, Adam’s Dream: Imaginative Incarnations in the Long Eighteenth Century, University of Cambridge (April 2013)

‘Chaotic Imaginings in the Poetry of Percy Bysshe Shelley’, University of Durham (June 2012)