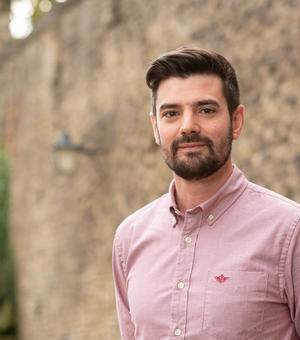 Rafael J. Pascual is a Postdoctoral Research Assistant at CLASP: A Consolidated Library of Anglo-Saxon Poetry, an EU-funded project based at the Oxford Faculty of English Language and Literature. He is also a Junior Research Fellow at New College and a Lecturer in Early Medieval English Literature at Magdalen College, Oxford. He received his Ph.D. from the University of Granada (2014), with a dissertation on the dating and textual criticism of Beowulf, on the strength of which he gained a two-year Postdoctoral Fellowship at Harvard University. He is the co-editor, with Leonard Neidorf and Tom Shippey, of Old English Philology: Studies in Honour of R. D. Fulk (Cambridge: D. S. Brewer, 2016), and one of the contributors to The Dating of Beowulf: A Reassessment (Cambridge: D. S. Brewer, 2014). His articles on Old and Middle English alliterative poetry have appeared in prominent journals such as Medium Ævum, English Studies, Journal of Germanic Linguistics, Neophilologus, Studia Neophilologica, Notes and Queries, and ANQ. He has also contributed to the Middle English section of The Year's Work in English Studies.

His dissertation received the 2013–2014 Extraordinary Doctorate Award. In 2017, he won the 'Excellence in Knowledge' Research Award of Grupo Caja Rural (one of Spain's leading banking groups) for his contributions to medieval English scholarship. These are some of the areas on which he has published peer-reviewed essays:

'Beowulf 501b and the Authority of Old English Poetic Manuscripts'. Forthcoming in Neophilologus.

'Hrothgar's Warhorse and the Audience of Beowulf'. Forthcoming in Medium Ævum.

'Beowulf 1889b, Andreas 1221b and Old English Poetic Style'. Forthcoming in Studia Neophilologica. Published online on the journal's website.

'On a Crux in Beowulf: The Alliteration of Finite Verbs and the Scribal Understanding of Metre'. Studia Neophilologica 87 (2015): 171–185.