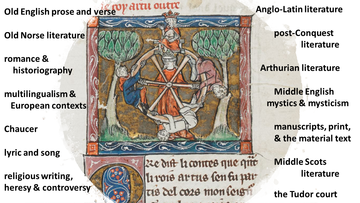 The Oxford English Faculty gathers together more people working on medieval English literatures and cuture than anywhere else in the world. The depth and variety of our research and teaching across the whole period, c. 650-1550, makes it an unparalleled environment for work in the field, which attracts the very best international and UK students, and offers them uniquely rich resources for medieval study. We offer a choice of one and two-year taught postgraduate degrees, internationally recognised for their high level of skills and professional training; and we actively encourage applicants to join us directly as research students on the DPhil. We can offer supervision in all fields of medieval literature, with particular areas of expertise highlighted below, and on individual members' webpages.

Key research areas include the full range of literary, cultural, social, and intellectual history, in broad and constant contact with medieval England's political, military, and legal historical contexts. We work with colleagues across all humanities faculties and beyond, in an interdisciplinary endeavour to understand the past. We are centrally concerned with the present significance of the medieval past, and with the social and cultural responsibilities we carry as researchers and teachers in this field.

The Making of England: A New History of the Anglo-Saxon World

Oxford English Faculty members on In Our Time

Simon Horobin (Hon. Sec.), Mishtooni Bose (Vice-President), and Liv Robinson (Exec. Officer) are all involved in Medium Aevum, the Society for the Study of Medieval Languages and Literature. The society offers a number of travel bursaries to research students and early career scholars.

Vincent Gillespie is a series editor of Exeter Medieval Texts and Studies.

Laura Ashe is one of the editors of New Medieval Literatures.

Francis Leneghan is Associate Editor of The Year's Work in English Studies and co-director of Oxford Medieval Studies.

Daniel Wakelin is Editor of Review of English Studies.

Andy Orchard is Editor of Notes and Queries and is on the Editorial Board of Anglo-Saxon England. Andy is also leader of an ERC-funded project: CLASP: A Consolidated Library of Anglo Saxon Poetry. The project recently hosted the Anglo-Saxon Metre and Literary Studies conference and workshop.

Francis Leneghan and Helen Appleton are co-organisers of The Oxford Psalms Network, an interdisciplinary research group hosted by TORCH and devoted to the study of all aspects of the Psalms.

Francis Leneghan, Rachel Burns and Rafael Pascual are organising SELIM 32, the annual meeting of the Spanish Society for Medieval English Language and Literature, at Oxford, 24-26 September 2020.

Francis Leneghan is organising a symposium on Rethinking English Literary Culture in the Age of Alfred, 26-28 June 2020.

Medieval storytelling: two of our DPhil students, Hannah Ryley and Gareth Evans, ran an AHRC-funded student outreach project on the art of storytelling. See the video of their workshop, and their website.

Oxford hosted the first conference of The Early English Text Society in May 2010, for which conference proceedings are available, and to celebrate that Society’s 150th anniversary, a workshop for graduate students in textuality and editing, in Oxford in May 2014. Follow EETS' tweets.

Laura Ashe and Daniel Wakelin were on the Programme Board of the 20th Biennial New Chaucer Congress, Reykjavik, Iceland, 16-20 July 2014; some fourteen graduate students and Faculty members presented papers and chaired sessions.

Nicholas Perkins curated the Bodleian online exhibition The Romance of the Middle Ages, which is full of multimedia resources. After Chichele: Intellectual and Cultural Dynamics of the English Church, 1443 to 1517 St. Anne’s College, Oxford, 28-30 June 2017

A number of faculty members are involved in the annual Oxford Medieval Mystery Cycles, held at St Edmund Hall

A large and vibrant research community in the subject, with a strong international profile.

An international peer-reviewed journal on medieval textual cultures,engaging with intellectual and cultural pluralism in the Middle Ages and now.

The unique manuscript of the earliest Middle English work to survive

Details of the wealth of medieval research and teaching in Oxford across many disciplines are available at the Oxford Medieval Studies site.